A fine 12 micron lot of wool from the New England made a splash this week by selling for $150 per greasy kg ($212 per clean kg). While the price was high by recent standards what was surprising was the appearance of such wool at auction. This article takes a look 12 and 13 micron production, sales and prices.

The best way of getting a handle on the production levels of wool at the very fine edge of the merino micron distribution is to look at AWTA core test data. Figure 1 shows the seasonal totals (the current season only runs to September) from 2001-2002 onwards for 13 and sub-13 micron wool, in farm bales. From 2007 through 2014 the volume for 13 micron wool varied around 100 bales per season while the sub-13 micron volumes was generally in the 20-25 farm bale range. From 2015 onwards the volumes started to lift with 13 micron reaching 300 bales in 2019-20 and sub-13 micron reaching 200 bales in 2020-21. While production has increased in recent years it remains a very niche wool category.

Not all of the volume seen in the AWTA data reaches auction. Figure 2 shows the seasonal proportion of the AWTA volumes that were accounted for by auction sales.  These proportions are easily influenced by farmer stocks held between seasons, so this factor needs to be kept in mind. For 13 micron somewhere between 40% and 60% seems to make it to auction, with this proportion being much less in years of low prices, presumably because farmers are holding the wool back as stock. For the sub-13 micron category the proportion seen at auction is much lower and has effectively disappeared in the past five years. Hence the surprise at seeing the lot sold this week.

Figure 3 combines the first two schematics to show the auction volumes sold by season for 13 and sub-13 micron wool in the past two decades. In a big year maybe 4-5 bales of sub-13 micron wool are sold, while 13 micron volumes prior to the 2019 downturn, which was subsequently followed by the pandemic downturn, have ranged between 100 and 200 farm bales per season in recent years.

Now, to price. The 12.1 micron lot sold this week sold for $212 per clean kg, on par with good cashmere. It was RWS accredited which will have helped greatly with its attractiveness. Figure 4 shows median prices per season for 12 and 13 micron wool (all types included) for the past two decades. Prices were high by current standards in the period prior to 2009.  After 2009 they deflated drastically, reaching a low around 2015 before firming up from then on although remaining a shadow of their former levels when production was much lower. The price paid this week was very handy in relation to the median price level by season for the past decade.

One lot does not represent the market, but the price for this one 12.1 micron lot suggests the good cashmere price is a reasonable benchmark to help set price ideas. The presence of RWS accreditation will have helped make the wool most attractive. 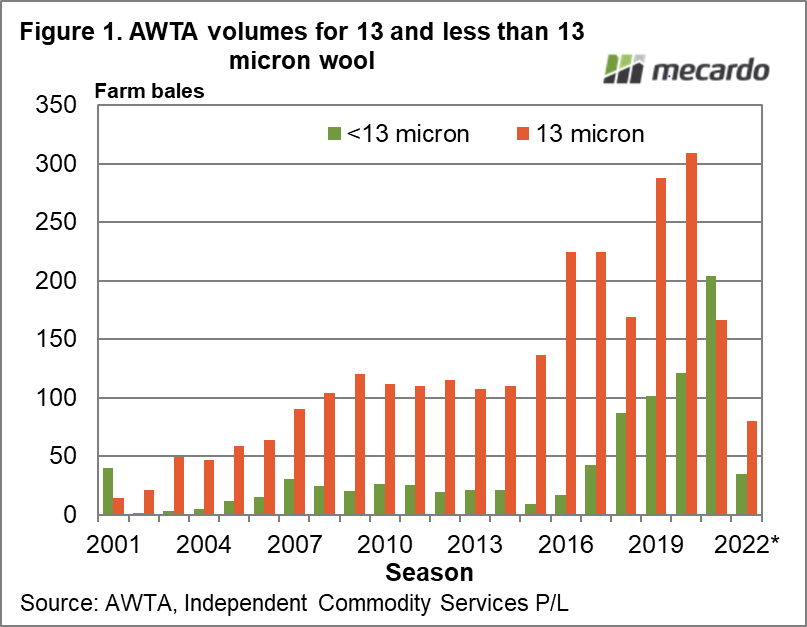 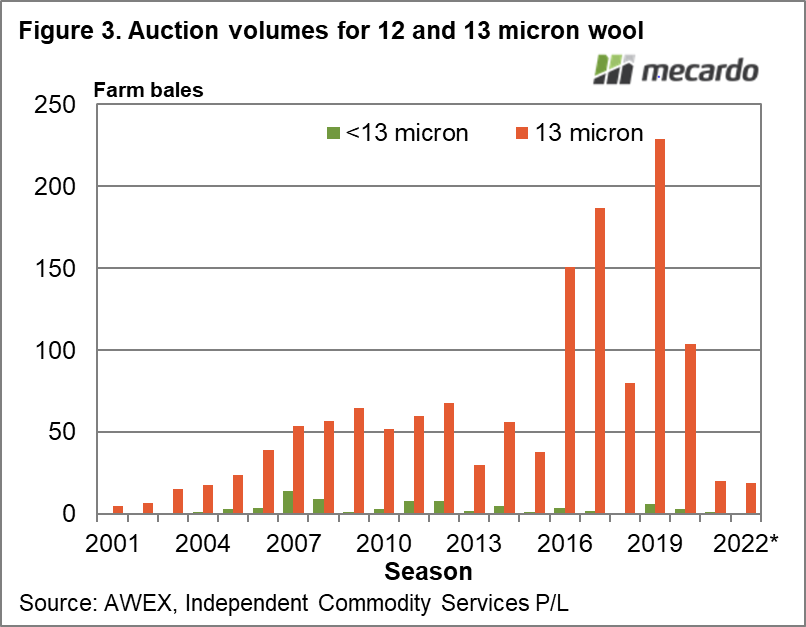