The cashmere market is not overly transparent especially for supply, which is highly seasonal with cashmere delivered to merchants during the northern hemisphere spring, as the goats moult, from the steppes of central Asia. The International Wool Trade Organisation (IWTO), estimated that last season’s cashmere production was 25,000 greasy tonnes, down from 29,000 tonnes in 2016 and 2017. The 25,000 tonnes greasy translates roughly to around 9,000 tonnes of fibre, compared to the 6,500 clean tonnes of 16 micron wool sold in Australia during the past 12 months.

Since the April article, when the cashmere buying season was just beginning, cashmere quotes have lifted by 7% in Australian dollar terms which has helped maintain fine merino price relativities at affordable levels.

Figure 1 shows a monthly price series for 16-micron wool (combing fleece) and for a cashmere series from the World Textile Information Network, which is the descendant of the old Bradford Wool report. The graph shows prices from early 2014 through to this month. Both cashmere and the 16-micron prices have trended higher since hitting pandemic induced lows in mid-2020. While the 16-micron price is within cooee of its 2018 highs the cashmere price has only retraced around half of its fall, although it must be kept in mind the cashmere market is not transparent as the Australian merino market is. 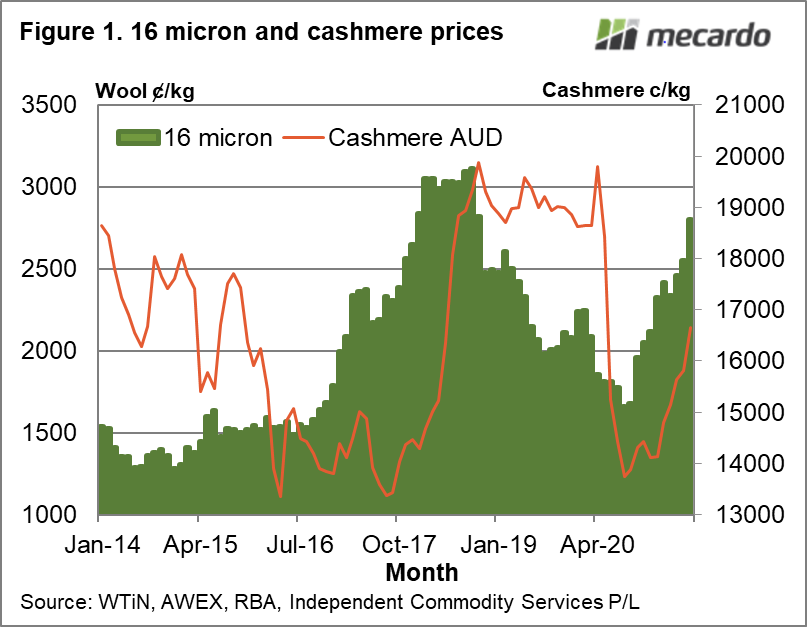