Following from the article earlier this week, this article zeroes in on the 21 micron category with regards to gross sales value, price and volume in recent decades. The 21 micron category remains an important category for the greasy market for processing and for other production regions outside of Australia such as South Africa and South America.

In the article published earlier this week, we looked at how the volume of merino wool sold was well up on year earlier levels (partly due to a base effect – volumes fell heavily at this time last year due to the onset of COVID-19). While the merino price overall has recovered a lot of the 2020 loss, price was not reflecting the big increase in the value of merino wool being sold. In this article we narrow in on the 21 micron category, a category which has seen some dramatic swings in production since 2017.

The first thing that stands out in Figure 1 is the declining volume of 21 micron sold during the past 25 years. It has fallen from 70,000 mt to around 10,000 mt, with a recovery under way now. Another feature of Figure 1 is the relative stability of the GSV from the late 1990s onwards. It does vary around its median level (US$219 million) which reflects years of weak and strong demand. There is no real trend in the GSV between 1999 and 2019. Simple arithmetic links the falling volume and stable GSV with a rising price, albeit with some dips and dales along the way. Figure 2 compares a median 21 micron prices series (all lots included) in US dollar terms and the annual GSV shown in Figure 1.

It might be the classic statistical over reach but this raises the question of whether the supply chain has a “comfortable” level of spending for the 21 micron category, in this case around US$220 million per season, with more or less according to the conditions at the time.

In 2018-19 the GSV fell to US$170 million, which is consistent with the market being in the grip of a down cycle at the time. The following season 2019-20 was even worse with the GSV down to US$93 million; again understandable given the pandemic added a second down cycle directly onto an existing down cycle.

The question now is will the GSV return to the US$180-250 million range, and in doing so lift the 21 micron price higher subject to an increase in the production of 21 micron wool. To look at the greasy market from a supply chain perspective, wool production and sales from other key southern hemisphere merino producers should be added to this analysis. 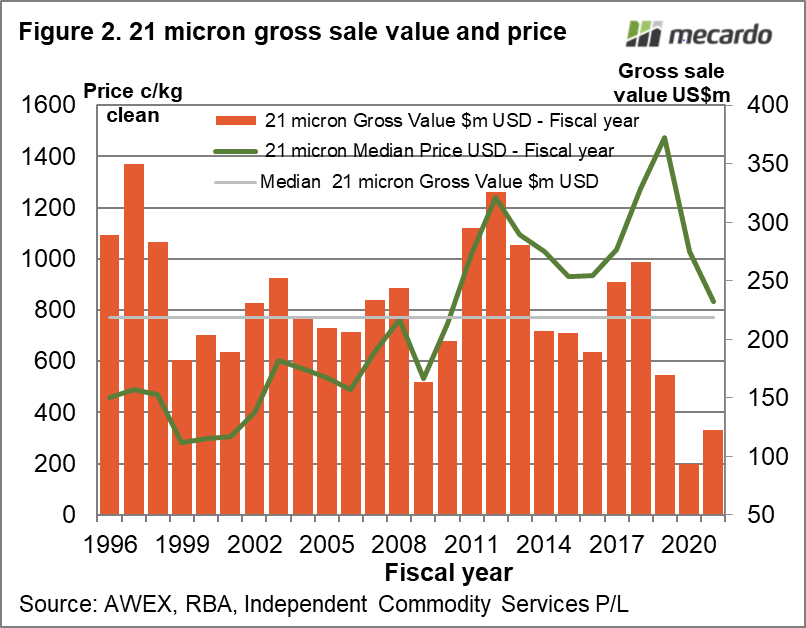