3 elements you must consider when pricing grain

During the 2015/16 harvest prices available for selling grain didn’t stack up quite as well as in previous years. In this analysis, the first of a series on pricing grain we will examine what makes a price, and why we have to separate the components of our pricing.

In the last couple of years we have been lucky to have received strong harvest flat prices. This year we have seen prices fall below the long term average (Figure 1). However, there is still a possibility of receiving strong results even in a year like this.

In order to develop a sound strategy for marketing your grain in all market environments it is important that you think of your grain as three separate items. The wheat price an Australian grower receives comprises of three components – basis, futures & forex.

Futures – The first component of an Australian grain price is the futures price.  A futures contract is an agreement to buy (or sell) an asset such as a commodity at a predetermined date and price. In general, the wheat market in Australia is based on the Chicago Mercantile Exchange’s soft red winter wheat contract. The market generally uses this contract as it the world’s largest wheat market giving access to a high level of liquidity.

Currency/Forex – The lion’s share of Australian wheat is exported, and with our price being based on the Chicago contract in USD the local price is heavily influenced by movements in the A$/US$ rate. In figure 2 we can see the influence of differing rates would have had on local grain prices. The red dotted line indicates where actual prices traded, and the other lines show where prices would have been at different A$:US$ rates. If all other factors were the same, at parity the average price for Oct-present would have been $207 vs $275. Conversely at 65c to the US$ the average price would have been a far more palatable $302.

Basis – The ‘basis’ component of a price can be simplified down to the difference, between the local price and the price of a futures contract. This basis can either be negative or positive, however in the recent years we have been lucky to have strong (positive) basis levels for the majority of the time. The basis level is impacted by a number of factors such as grower selling, domestic supply & freight costs. If for example there was limited grower selling and traders required grain in order to fill shipping requirements, we would expect basis to strengthen.

If we think of these components separately, in figure 3 taking into account data since May 2015, we can see that the highest basis & CBOT wheat in A$ terms then the price received for Melbourne ASW would be just shy of $347p/t substantially higher than flat price bids over the period. It has to be noted that you would have to be quite lucky to hit the top on both, and that the lowest basis and CBOT combined would equate to $220p/t.

As we understand what constitutes a local price available to farmers, it is important to develop a view of where the market is going based on futures, forex and basis as opposed to just where the flat price sits. At Mecardo we are able to help formulate that view on the market, through our in depth analysis.

Next week we will look at how you can separate your grain marketing into its component prices, and make the most from your production.

Australian growers have been lucky in recent harvests due to strong flat prices on offer. In the 2015/16 harvest prices were not quite as attractive in local terms.

In the coming year, we think it is important to have a strategy for low flat prices due to the abundant wheat supplies both globally and all going well locally. A plan can be developed in a number of ways for separating your pricing components, which if planned well can result in higher average prices 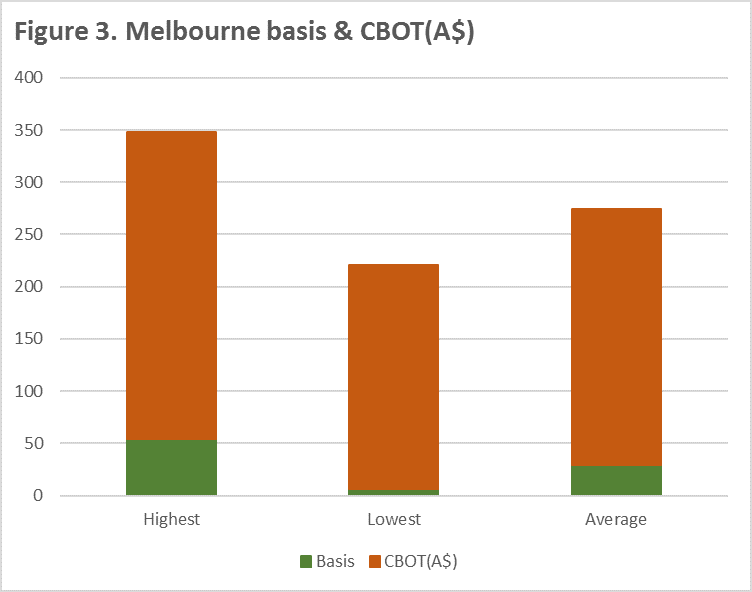