Broad crossbred prices continue to plumb new lows, a mere five years after they had spent five years (2010 to 2015) trading at stratospheric levels. This article takes a look at an Australian 34 micron prices series and its relationship to polyester staple fibre prices.

Figure 2 shows the same series as Figure 1, but in US dollar terms as the supply chain would generally view them. The high prices from 2002 in Figure 1 disappear (a function of exchange rates), as do a lot of the boom price levels of 2015, again a function of exchange rates rather than demand. The current low price for 34 micron also changes, as in US dollar terms it is on par with the lows of the late 1990s when apparel fibre prices were generally depressed for an extended period (fine Merino wool was one notable exception at the time).

Note that the 34 micron and PSF price series follow similar trends and cycles, except for 2012-2015 when 34 microns buck the trend and trade at high levels. During that period most apparel fibre prices trended lower.

In Figure 3 the relationship between the 34 micron and PSF prices series is shown in US cents per kg (left hand axis) and as a simple price ratio (right hand axis). In terms of the price ratio, the low point of the past 25 years has been around 1.5-1.6. This is the ratio the 34 micron has fallen to, well down from the ratio of 3.5-4 reached in 2015-2016. In terms of the premium in US cents per kg terms, 50-70 cents has been the low reached in the late 1990s and again briefly in early 2009. The premium has shrunk to the low range again.

Energy prices have fallen this year, which will put some downward pressure on PSF prices. The PSF price is approaching the low levels reached in the depressed late 1990s, so the scope for further downward movement in the PSF is hopefully limited. Stabilisation in PSF prices looks to be required to help the 34 micron price steady.

In proportional terms, farmers have been building stocks of broad crossbred wool on par with other micron categories this season. While that has not been a successful strategy, it may start to be worthwhile, given the low price level in US dollar terms, the low basis to polyester staple fibre price, and the (hopefully) limited downside for polyester staple fibre prices. Time will be the key to a recovery and that will require two components which are, firstly a pickup in economic terms and secondly a pickup in demand for broad crossbred wool in relation to other fibre prices. 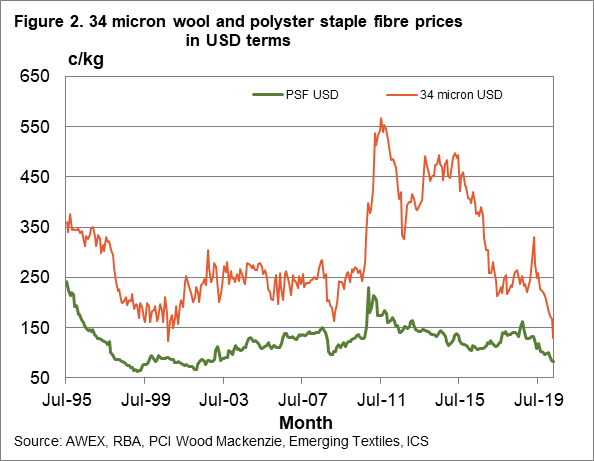