90CL keeps pace as US looks for more beef

All eyes have been on the Eastern Young Cattle Indicator’s record run in recent weeks - well for the entire year actually. It closed off last week at a new high of 1028ȼ/kg, which was 32% higher year-on-year - exciting news for producers with cattle ready to turn off, slightly nerve-wracking for those still a few months out, and quite painful for those looking to buy in, no doubt. But with plenty of analysis on what’s driving the EYCI and what’s to come for beef’s favourite figure, let's have a look at our other well-watched industry indicator - the 90CL.

The 90CL – the US export beef price – is sitting at 826ȼ/kg (in Australian dollars), an increase of 24% year on year. If we compare the 90CL with the EYCI, the EYCI has gained 250ȼ/kg, while the 90CL is up 161ȼ/kg. Figure 1 shows us that the EYCI has been trading higher the 90CL since around July 2020. This has the EYCI at a premium for 13 months – the longest period in the past two decades, and likely further back than that. If we look back to Australia’s last cattle restocking phase in 2016/17, the EYCI premium over 90CL lasted nearly 12 months, however the two indicators spent more time much closer together in that period than in the current 2020/21 phase. With the two prices now spread by 20%, it is unlikely they will converge in the short term.

However, this price spread is all EYCI driven – the 90CL is still trading at historically high levels, and has been on the rise for most of 2021. The 90CL and the National Medium Cow price spread has followed the usual trend of becoming much tighter since trading conditions improved in Australia, but it is still sitting at 33% discount to the 90CL, despite the National Medium Cow Indicator having hit a record of 617ȼ/kg carcass weight last week. This is a long way from the 5 to 15% spread recorded in the spring of 2016 – the last time the EYCI was skyrocketing.

As we looked at last week here, the supply shortage which comes with the lowest cattle slaughter in 35 years, thanks to continued positive seasonal conditions for much of the country, is the main driving force behind domestic cattle prices. But it is also pushing up the US export price. According to the Steiner Group’s latest US Beef Market Report, imports from Australia, New Zealand and Uruguay (which has restricted export volumes due to its domestic policy) were down 13,000 metric tonnes for the month of August year-on-year. In comparison, imports from Brazil and Nicaragua only increased 3000 MT on the previous year. The US domestic equivalent to the AUS 90CL has also increased 24% year-on-year.

This time last year we were speculating how long domestic prices could continue to strengthen before there was pushback from our international markets. But rather than pushback the US has had to keep up to maintain supply, which is even tighter than many predicted. While the US is headed into winter which slows their domestic demand, at the end of July their beef in cold storage was 12% below the five-year-average. Short-term, this should continue to limit any downward pressure applied to Australia’s domestic prices. 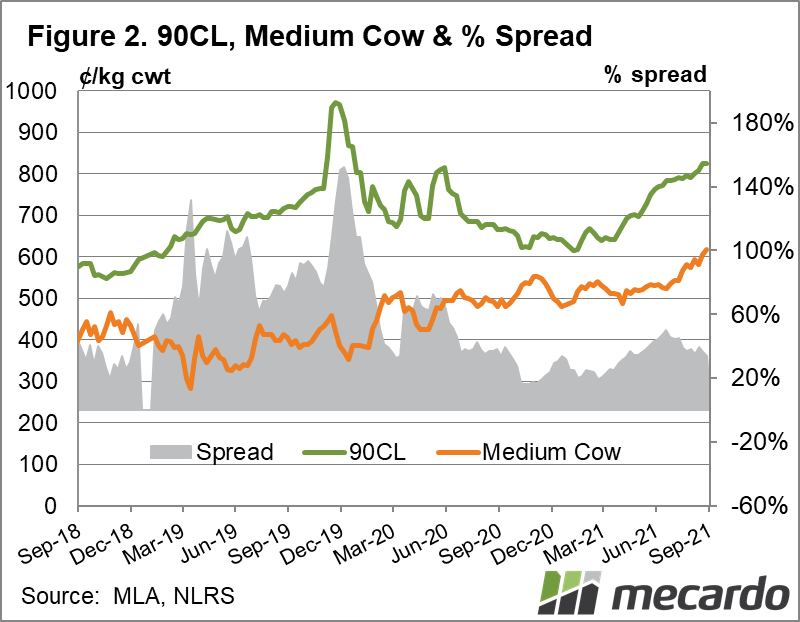