A subscriber has asked Mecardo to look at wool prices and GDP growth, which given the strong rebound in economic activity from 2020, is a reasonable request. In this article, we look at OECD (and China in the later years) GDP growth and the average Australian Merino price.

In the 1980s the rule of thumb for wool prices and GDP growth was that prices would rise when OECD GDP growth was above 3%, and ease when growth was below 3%. It was a reasonable rule when wool was processed and consumed mainly in OECD countries that were developed and reported good quality economic statistics regularly. Since then the world has become more complicated in terms of where wool is processed and consumed along with available economic statistics.

To start with Figure 1 shows the annual Merino price and the real GDP for the OECD from the mid-1970s to the mid-1990s. The major complicating factor for this period is the Reserve Price Scheme which supported prices at the bottom of economic cycles, which weakens the relationship between GDP and wool price. A secondary complicating factor was exchange rates, with the Australian dollar masking how wool prices looked to the supply chain. Despite these factors, the Merino price and the OECD GDP were tightly (positively) correlated from the mid-1980s to the mid-1990s. It was a good time to be an analyst, as you could project wool prices given high-quality economic projections.

In the late 1990s, the relationship between GDP and the Merino price weakened. Figure 2 shows the Merino price series and OECD GDP from 1996 to 2008. In the late 1990s, apparel fibre prices were generally depressed for a run of years, which dragged medium and broad Merino prices down with them – fine Merino prices escaped. Then in 2001, as economic growth dropped, the last of the stockpile sold and the greasy wool market went through its standard post stockpile rising price cycle (in 2002). As economic growth picked up towards the middle of the decade, wool prices struggled; not picking up until 2007-2008.

The plummet in economic growth in 2008-9 was accompanied by a plummet in wool prices. This part of the relationship is rock solid. It highlights the weakness of the GDP measure as an oversimplification of modern economies, where one number cannot capture all of what is going on economically except in some extreme situations.

Figure 3 looks at the Merino price and GDP for the OECD and China from 2009 to 2021. GDP does not provide much explanation of price movements, except again correlating in an extreme period during 2020 when economic activity was badly hit by the pandemic.

Estimates and projections of GDP can be useful in developing an idea or story of where wool prices are headed, but are not that useful in building mathematical models of wool prices. A large part of the problem is that too much is asked of GDP numbers in terms of reflecting various economic conditions in relevant markets (in this case for Merino wool). 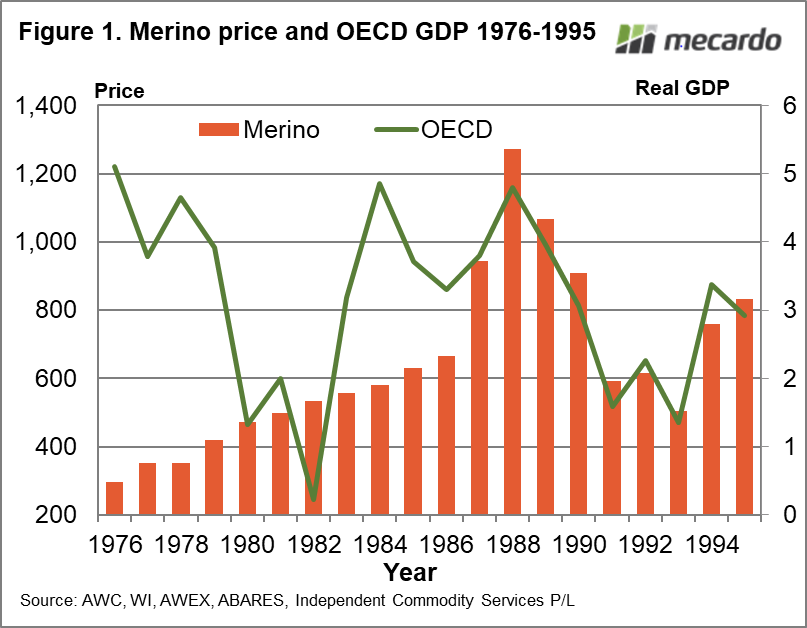