A big WIN for restocker lambs

There was no stopping the count this week, the number of lambs sent to the yards started rising again, and both sheep and lamb markets slid south. That was despite the best efforts of restockers who helped prop up competition and ended the week with a big WIN for those selling restocker lambs.

Yardings moved higher last week but that was coming off the back of a week of extremely tight supply. The 10% lift saw 185,574 lambs yarded on the east coast. This was 6% under the five-year average for this point in the year, so we’re still seeing numbers subdued after the big offload in early October. NSW was responsible for last week’s lift, with throughput back in Victoria. Saleyard reports out of Ballarat and Hamilton hint that this week saw a real lift in new lamb numbers so supply is likely to be all up from here.

Sheep yardings in the east were slightly lower on the week with no sign of the next seasonal lift in supply yet. Western Australia was another story where an extra 4k sheep were yarded compared to the week earlier.

Slaughter numbers of both sheep and lambs were lower for the week ending the 30th of October.

The Eastern States Trade Lamb Indicator (ESTLI) lost 34¢ on the week to end at 761¢/kg cwt. The Western market didn’t fare much better with the Western Australia trade lamb indicator dropping 19¢ to 642¢ and continuing to lag well behind the east coast. This isn’t unusual for this time of year, with the season finishing. As discussed by Jamie-Lee earlier in the week (view here), demand from across the Nullabor has been adding some support, and will continue to do so as WA supply tightens up.

It was restockers that kept competition at saleyards this week. Restocker lamb prices lifted in most states, to see the National Indicator up 21¢ to 902¢/kg cwt. In NSW the Restocker indicator was just a smidge under 1000¢/kg cwt. There is currently a 182¢ spread between Restocker and Trade lambs’ prices on the east coast. We haven’t seen a gap this big since April, and while it’s unlikely to last at these extreme levels for too long, active restockers are here to stay.

Apart from restockers, all categories of lamb lost between 20 and 25 cents on the week. Even mutton couldn’t manage to hold at recent levels, losing 16¢ on the week to close at 603¢/kg cwt.

Rain doesn’t look like it’s dropping off the BOM’s forecast for the east coast anytime soon. This will help to keep restockers active and put a floor under prices as lamb supply continues to move higher. 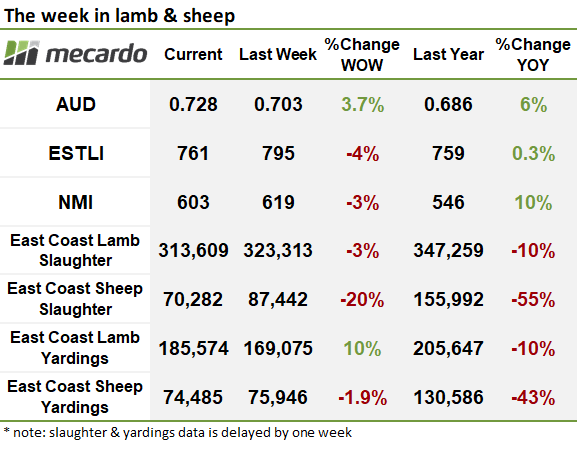 This time last year the wool market was tanking, but it wasn’t quite early enough to see a switch out of Merino joinings and into

Lamb prices have been moving within a fairly narrow band over the recent weeks, suggesting that sellers and buyers are content with the market. Restockers 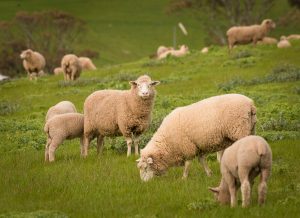 The mutton market hasn’t hit the highs of this time last year, but is still offering good returns for those with sheep to turn off.