A boost to Aussie wheat – a boost to world exports

There have been some new crop forecasts released recently tipping what can only be described as a bumper. We have to wait until early December for the official Australian Bureau of Agricultural and Resource Economics and Sciences (ABARES) forecast, but we can take a look at what the speculated tonnages might mean for the market.

Harvest is rolling on with few disruptions as yet, which is great news for supply and quality.  Queensland and Northern NSW have been going for three weeks, South Australia and WA ramped up a fortnight ago and southern NSW and the Victorian Mallee started last week.

Good early yields have prompted some forecasters to up their production estimates, and it might be touch and go as to whether we produce a record this year.  The Grain Industry Association of WA (GIWA) increased their total winter crop forecast by 7.7% last week, with wheat up 6.8% to 7.9 million tonnes.

WA is not where the increase will come from however, with ABARES September Crop Report forecasting an 8.9 million tonne wheat crop. Despite the increase, the GIWA prediction is still a million tonnes below ABARES.

The big increases in tonnage will come from NSW, Victoria and SA.  In September, ABARES were already forecasting strong yields and over 10 million tonnes from NSW. In 2016 we saw average NSW yields of 3t/ha, and if this is achieved again it would add 840,000 tonnes.

Most of the extra wheat would have to be exported, and given Australia is still a major exporter in good years, it will add significant supply to world markets. The latest USDA WASDE had Australian production pegged at 28.5mmt, so there might be an extra 3mmt.

Figure 2 shows world wheat exports were pegged at 190.5mmt, with an extra 3mmt from Australia lifting global wheat exports by 1.6%, a new record would be set.

Global wheat prices have been easing in recent weeks, largely on the back of improving northern hemisphere conditions which have wiped $20/t from Chicago SRW swaps. The market will have to wait another three weeks before the ABARES and the USDA update Australian production and exports, but an improvement in export supplies could see some further easing in the wheat complex. 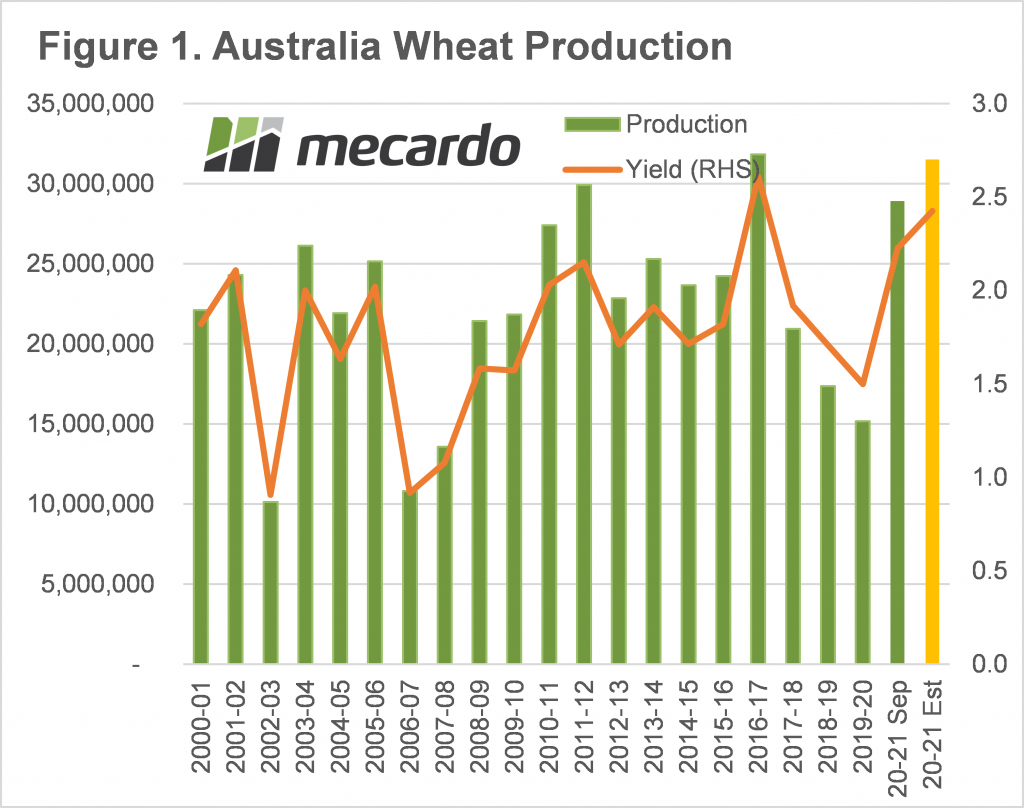