A catch up on CM-NM premiums

Premiums for non-mulesed wool remain of continuing interest for wool growers, as the absence of mulesing tends to increase operating costs, specifically in labour which is an input Australian extensive farmers have reduced over the decades. This article takes a look at the price effect of ceased mulesed/non-mulesed (CM-NM) on Merino fleece.

Typically price models for greasy wool are additive. Starting with a base price for breed, category, micron and length (such as Merino fleece, 19 micron and 80 mm long) and then adding or subtracting to the base price for various attributes such as staple strength, mid-point break, vegetable matter. A premium for wool which is declared CM-NM (mulesing status) is included (see the AWEX regional Premium & Discount Reports). In reality, wool pricing is more complex and while the base components tend to be additive in nature, many of the lesser attributes are conditional. This means they will affect price if teamed up with certain combinations of attributes. Mulesing status tends to be conditional in its effect on price.

In Figure 1 annual estimates of the price effect for Merino fleece 70-85 mm in length with a staple strength of 40 N/ktx and declared CM-NM are shown from the 2011 season onwards for a range of microns from 15 to 21. A line is overlaid on the graph which shows the median price effect across micron categories.

From the 2011 season (2010-2011) through to the 2018 season there is a small premium generally showing up of up to 2% for the 15-17 micron categories. The median premium is around 1% for this period. In the 2018-19 season, the premiums increase for the 19 micron and finer categories. The increase has continued this season, amongst a market that has had two significant collapses in price, lifting the median effect across microns to 2.4% for the season to date. The increase in premiums from 2018 onwards matches the experience outside of auction for direct contracts which seek to source non-mulesed wool and seek to pay for this by ways of premiums.

Figure 1 is the first example of where premiums for CM-NM status are conditional upon other wool attributes – in this case, fibre diameter. The premiums apply to finer Merino wool, the more so the lower the fibre diameter. Figure 2 shows a possible structural reason for this on the supply side. Figure 2 shows the proportion of CM-NM wool sold in the current season for the data shown in Figure 1, along with the CM-NM premium for the season to date. Over half of 15 micron fleece sampled in Figure 1 had CM-NM status with the proportion falling as micron broadened. For 20 and 21 micron, the proportion was less than 20% – there was simply less scope for the buy side of the industry to put together meaningful consignments if they wanted to.

Figure 3 repeats the analysis of Figure 1 but for lower strength wool (around 35 N/ktx). The premiums in recent years are markedly smaller. Premiums for CM-NM status are also conditional upon staple strength. Figure 4 looks at this further by showing the median price effect from 2011 onwards for 70-85 mm long Merino fleece with a staple strength of 24 N/ktx. There is effectively no premium on average.

Premiums for wool with a CM-NM status tend to be focussed (on average) on Merino fleece that is finer than 19 micron and with good staple strength. The presence of quality scheme accreditation can extend the range of wool for which premiums for CM-NM status are paid. While premiums have increased notably in recent seasons, they are still conditional upon other attributes of the wool being offered for sale. 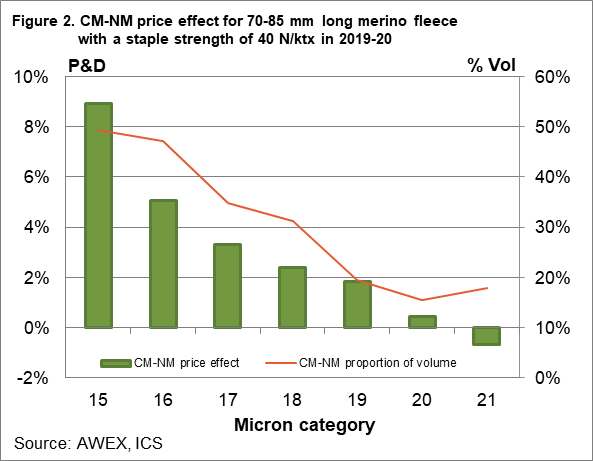