With reports that significant export orders were secured before this week’s sale, the expectation was that the market would be stronger. This was in fact the outcome, with the market recovering the losses of last week with a strong bounce from the opening sales.

Fremantle also had a positive week selling 4,185 with a low pass-in rate of 5.8%, with the Western Market Indicator (WMI) again lifting 33ȼ cents to 1389ȼ.

AWEX reported that by the end of the opening day all individual Micron Price Guides across the country had risen, adding between 14 and 60ȼ. The second (and final) day was one of consolidation with movements in the -16 to + 15ȼ range.

The lift in the market was widespread across the Merino offering – in Melbourne the 17 MPG was up 54ȼ, 18 MPG lifted 55ȼ and the 19 MPG rose 45ȼ. The 21 MPG posted a 57ȼ lift in Melbourne and a 46ȼ rise in Sydney, taking it back to the levels in play before the winter recess.

The crossbred indicators were more constrained, with the 30 MPG down 6ȼ however the 26 MPG lifted 33ȼ.

Cardings were dearer in all centres, lifting 4ȼ in Melbourne, 22ȼ in Fremantle and 16ȼ in Sydney.

This week on Mecardo, Andrew Woods looks at the premiums in the market for non-mulesed wool. Demand for non-mulesed wool continues to show up in the greasy wool market, with the bigger premiums showing up for the finer merino micron categories. For the major merino categories the premiums continue to be in the order of 1-3%, although RWS lots (on very small volumes) occasionally are priced at much greater premiums.

Next week Fremantle, Melbourne & Sydney are all selling on Tuesday & Wednesday.

The offering should continue to receive the stronger bidding noted this week. 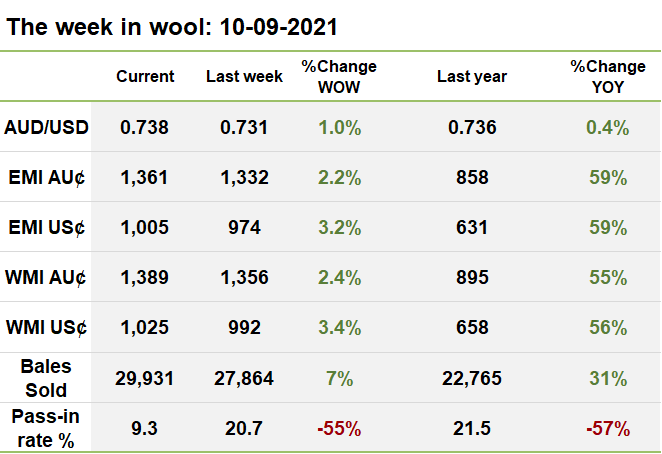