The much anticipated USDA supply and demand (WASDE) report did not fail to disappoint. Most in the trade were expecting the USDA to publish fairly conservative numbers - adopting a moderate approach to whittling down their estimates. I think it fair to say no-one expected the razor job they performed on the wheat market.

For a long time we all knew Canada was in trouble.  The USDA sliced the US spring wheat numbers back hard a few weeks ago, but surprisingly left Canada alone.  This report saw 7.5mmt wiped from the original 31mmt estimate in one swoop.

Perhaps more surprisingly was the savage cut to Russian production – a massive 12.5mmt to well below trade expectations at 72.5mmt (compared with the July report at 85mmt).

It makes the increases to Ukraine (+3mmt) and Australia (+1.5mmt) pale in significance.

The market will have some work to do to stimulate more wheat acres in the months ahead and as such I think we can expect elevated wheat prices for some time to come.  The cuts to production have come almost exclusively from the major exporters, with stocks sitting at 52mmt or a rather uncomfortable 12.7% stocks to use.  For reference, global stocks were at 13% in the extremely volatile 2006/07 season.  It does not leave any room for error now in a market that up to a few weeks ago, was the least of our worries.

Corn also added to the bullish flavour of the August report.  Corn stocks were already tight and the drought and subsequent frost/freeze events in Brazil added great emphasis on US corn supplies.  The corn market had been trending sideways on the expectation that the US crop was building and import demand was flattening.   The report surprised a few by coming out well below trade estimates.

The USDA made some long overdue cuts to the 2020/21 Brazilian corn crop, slicing 6mmt from the safrinha crop to record a total 87Mt (down from 93mmt in July).

US corn production estimates were also cut, on the back of reduced yield expectations.  The market had been long expecting ‘trend line yields’ of 176.9bu/ac (11.3t/ha), so the USDA’s 174.6bu/ac (10.9t/ha) caught the market off guard. Despite record yields in the eastern corn belt, the drought and extreme heat experienced in the western corn belt dragged yields down.  US corn production is now tipped to be 374.7mmt (from 385.2mmt). Overall US ending stocks were cut to 31.6mmt, down from 36.4mmt.  Chinese corn import projections were left unchanged at 26mmt.

The numbers will be dissected and argued over until the next report.  The wheat market is now undoubtedly friendly for the grower but buyers are in for a rough time. 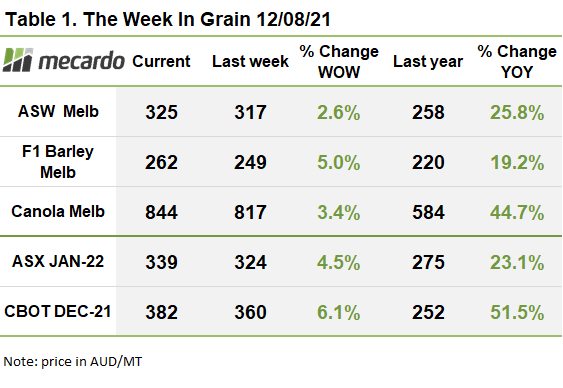