As the brilliant Dennis Cometti used to say ‘a week can be a long time in sport’, and so too it is in the wheat market.

This week, wheat has been underpinned by two of the world’s major buyers seemingly surrendering to the notion that high prices are here to stay.  Firstly, Saudi tendered for 620kmt of hard wheat and ended up buying 1.27mmt.  Ukraine is the likely major beneficiary of this tender.  Egypt quickly followed suit with a tender of 180kmt which was awarded to Russian traders at a price US$6-7/t higher than the previous week. Since then, the market has retreated a little in the absence of further bullish inputs.

Australian cash prices have also fallen in the face of increased grower selling (including old season) and the realisation that the trade will not be able to physically move everything due to constraints in elevation capacity.  It makes for an interesting scenario.  The trade want to capitalise on demand but also know that the consumer will be looking towards Northern Hemisphere new crop.  There is a sizeable inverse in old/current prices and new crop and the trade will be reluctant to avoid purchasing grain now but having to hold until after May with the potential of selling into a falling market.  The assumption here is that Northern Hemisphere crops enjoy a return to ‘normal’ production.

Another issue facing the trade is the forecast for heavy rain across Eastern Australia over the coming weeks.  Australia is one of the few places that is forecast to supply milling wheat after drought affected Canada and rain affected Europe has seen milling wheat in short supply.  Broad scale weather damage (anyone remember 2010?) will see that supply of milling wheat become even tighter.  Conversely, a higher-than-average supply of feed wheat, will eventually find homes, but at some cost, especially with the trade geared up for sales of milling quality.

Lastly, news overnight of Russia imposing a six-month quota on fertiliser exports further tightens the noose around the neck of anyone yet to secure their MAP/DAP for next season.  Russia traditionally supplies around 10-20% of the world’s phosphates and urea.  It is hoped alternative phosphate sources will be found, but with natural gas demand about to peak in the Northern Hemisphere, the cost of nitrogen appears to remain on the up.  The price and availability of fertiliser is the potential cap to production if growers either can’t source, or need to cut back based on business considerations.

Against a backdrop of good demand, Australian wheat prices for this and next season look robust. However, weather and soaring input costs will need to monitored and make for some tough decisions going forward. 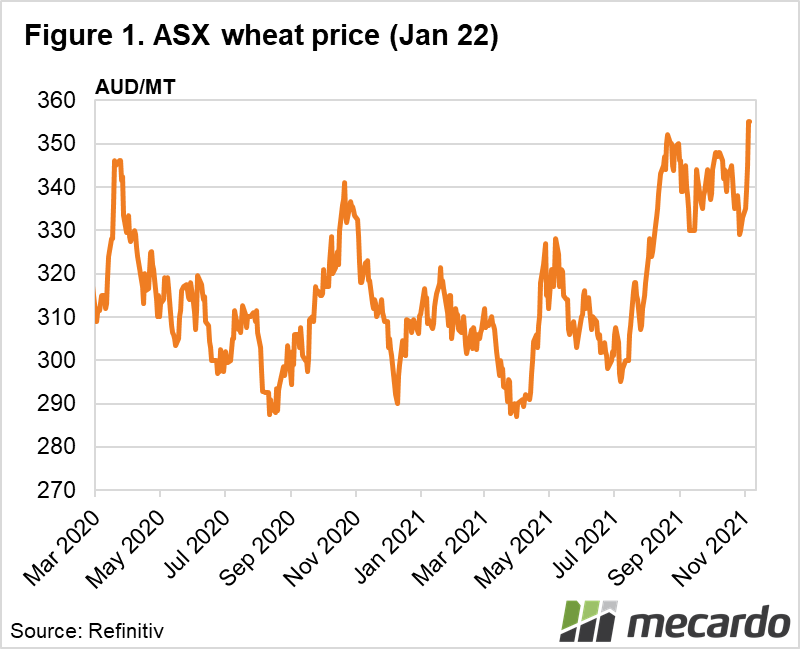