Adding lambs and restricting processing not a good combination

We have to wait for the official slaughter numbers these days, and with quarterly reporting, it’s a bit hard to marry them up with our monthly data. However, there is some good analysis to come out of the official figures, and for lamb at least, it looks like forecasts are going to have to be lifted. Combine this with processing restrictions in Victoria, things are going to get interesting.

Last July the Australian Bureau of Statistics (ABS) moved to quarterly reporting from monthly, and it’s not a big issue week to week, as Meat & Livestock Australia (MLA) report weekly numbers that are more up to date.

The problem is the MLA and ABS numbers aren’t quite apples and apples, more apples and pears.   MLA annual slaughter forecasts published in their industry projections are based on ABS numbers. When we use weekly data to compare as a guide to how slaughter is progressing against forecasts, we can be out by a few thousand head.

What we did find is that second-quarter lamb slaughter clearly outstripped first-quarter, and we’re expecting similar rates for the first two months of the third quarter, based on MLA data.  Figure 1 shows the relatively strong autumn and winter lamb slaughter rates.

The strong winter lamb supply was largely unexpected.  MLA’s forecast for lamb slaughter is 20.3 million head. Based on official data, and MLA’s weekly data for July and August, there will only be 6.5 million head of lambs left for September to December. This would be 4% lower than 2020.

Figure 1 shows this is likely a little light, with survey data and anecdotal evidence suggesting there will be more lambs about this spring and summer.

For sheep, slaughter rates have been closer to expected, and were very low in the second quarter.  For sheep, the MLA forecast looks to be more on track, assuming we have a ‘normal’ seasonal rise, to still hit the target of 6.1 million head.

Recently announced Victorian processor Covid-19 restrictions might cause further supply issues though, and create a bottleneck at processor levels.

A 20% reduction in workforces will mean Victoria, the largest sheep slaughter state (Figure 3), will at best mean slaughter can’t rise in response to spring supply.  At worst slaughter capacity will be cut, just when supply starts to roll in.

If MLA’s lamb slaughter forecast is correct, it’s good news for prices as supply won’t increase too much further over the coming months.  In reality, there are more lambs out there than expected, and slaughter rates will rise, but still, the more that have gone through the system already might alleviate some of the impacts of processor restrictions over the coming week.

We were already hearing concerns around slaughter capacity, and there will be plenty of producers hoping the confluence of increasing supply and processing restrictions don’t last long, or we are in for a spring of lean pricing. 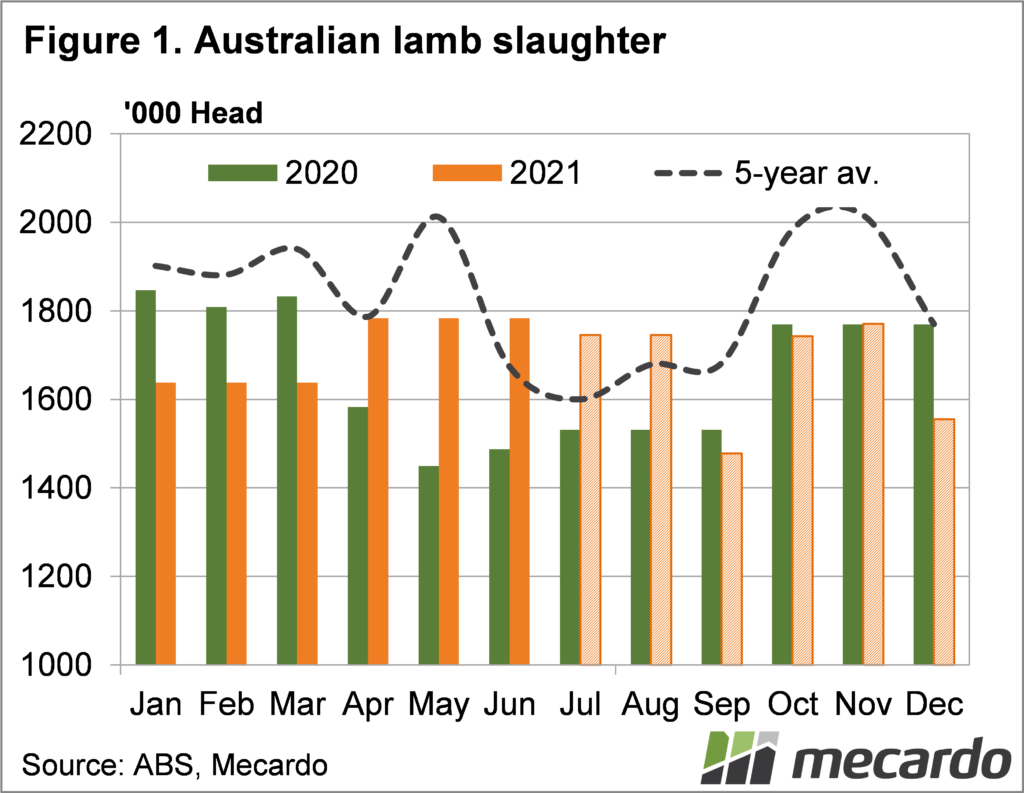