All good things must come to an end

Alas the wool markets stellar momentum came to an end this week. The final week of sale for the 2020/21 season saw a large offering presented to a lacklustre market which resulted in an end to the six week streak of price improvements.

Despite the final week capping off the season with a bit of a weary bleat, It wasn’t all bad news if we look at how far the market has lifted over the last year. AWEX reported that the Eastern Market Indicator (EMI) lifted 28% over the season. A comparison of the 17MPG over the season highlights the impressive resurgence of demand for fine wools. The southern 17MPG lifted 61% over the 2020/21 wool season.  The total amount sold through the auction system for this season at $2,246.72 million was 14% higher than last season.

In the West the market was also broadly softer. The Western Market Indicator (WMI) lost 37ȼ to settle at 1,440ȼ.

42,847 bales were offered to the market this week.  Sellers were clearly not content with the direction the market was heading and were more than willing to pass in. The pass in rate for the week more than quadrupled to 21.6%, which meant that 33,582 bales were sold. This was an increase of 1,947 (6%) bales from the week prior, but still well below the 40k bales sold tally from just a few weeks ago.  The average weekly clearance for the season was 34,186 bales, 7,048 bales per week more than 2019/20 season.

No MPG was spared from the weaker market. The finer MPG’s proved more resilient in Melbourne, but still lost 20 to 30ȼ for the week. Most other Merino MPG’s lost between 60 and 90ȼ in the east. Crossbred fibres also struggled to hold and the 28 MPG lost 20ȼ.

Results for cardings were mixed, losing 13¢ in Sydney & gaining 4ȼ in Melbourne and lifted an impressive 29ȼ in Fremantle.

Next week will be the first sale of the 2021/22 season. All selling centres will be amongst the action with sales on Tuesday and Wednesday in all three centres, in addition to a Thursday sale in Melbourne.

54,982 bales are scheduled for sale next week in what will be a large opener for the new season. 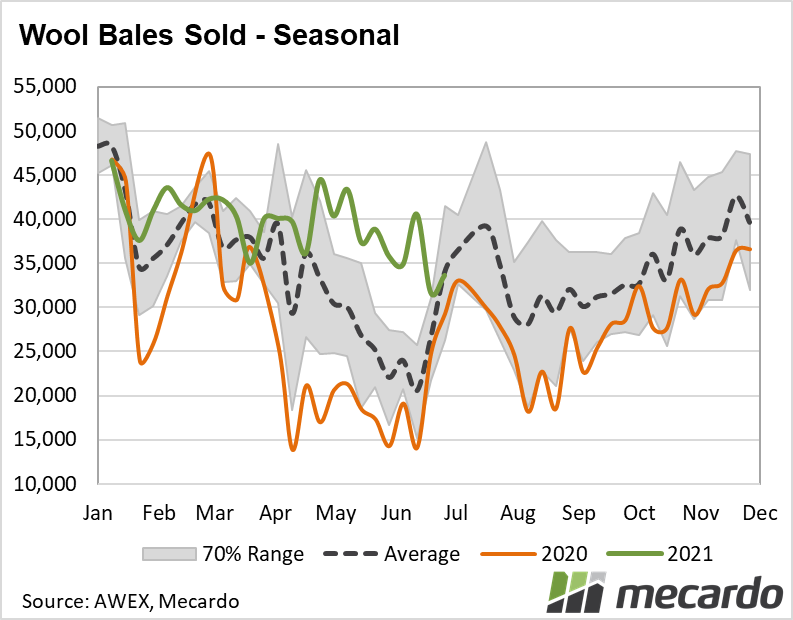 The final sale before the traditional three-week recess produced a solid result. The national offering remained large as growers responded to recent stronger prices and Sheep and lamb offtake – an update Wool auctions go into a three week recess after the sales this week, recommencing in mid-August. Given the volatility in prices during the past two