Another EYCI record, and restockers return

This week was one of small strengths, and yes, another record for the EYCI, with the restocker market recovering after several weeks of losses, and 90CL struggling upwards even against the pressure of a rising AUD. As expected for this time of year, yardings put on another surge as the weather has started getting warmer and drier in the more southern states, but slaughter numbers were also significantly stronger.

Yardings surged again, putting on another 13% from the week prior, which also saw a similar lift, indicating increasing interest in offloading cattle as we settle into the summer period. Not surprisingly, the selling pressure was coming from VIC and NSW, which respectively booked a 38% and 18% increment on last weeks figures, with QLD and SA also participating with more modest rises of 4%.

Overall, yardings increased by 6,039 head compared to the week prior, with 51,125 cattle yarded on the east coast for the week ending 13th November; which is 34% below last years figures, but only 13% below the 5-year average. Over the last two weeks, we have seen a cumulative increase of over 10,000 head, but for this time of year, this is hardly unusual, and this week is likely to have seen even higher numbers of cattle to market, with the trend expected to continue into December.

Slaughter numbers turned around from the backtracking of the last couple weeks, and saw a good uplift last week, booking a 7% increase on the week prior.  The upward movement was led by NSW and VIC, which both increased processor throughput by around 17%. Overall, a total of 110,134 cattle were processed for the week ending the 13th November.

Despite being down 30% compared to last year, slaughter is currently only 22% off the average. However, to put this into perspective, slaughter has never been lower for this time of year in the last decade.

In the face of probable higher yardings this week, the EYCI still quietly notched up another record high yesterday, lifting 5¢ from last week to finish up at 829¢/kg cwt.

Moving onto what’s been happening in the categories this week, the big news is that after a few consecutive weeks of falls, the restocker market has rebounded, but, perversely, feeders have slowed down their buying, with the first, albeit modest fall experienced in over two months.

Most of the restocker buying pressure seems to be emanating from QLD, and to a lesser extent, NSW. The QLD enthusiasm could possibly be traced back to an expectation of good rains from the northern monsoon season.

Rainfall is looking a bit more generously distributed, if on the low side this week, with 1-5mm delivered down the east coast, with eastern VIC awarded a solid 15-25, and central Australia missing out.  At this time of year, we expect that yardings will continue to increase as summer progresses and the land dries off in the south, and slaughter might pick up a bit to match. 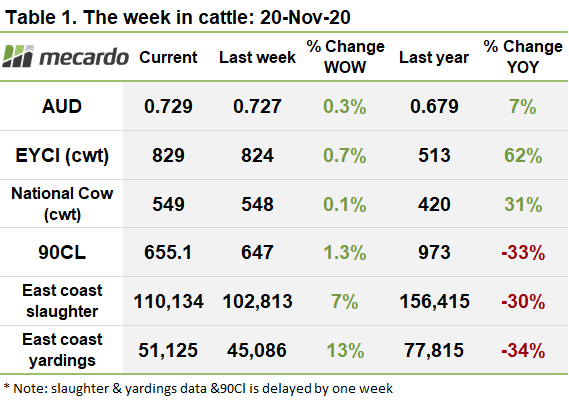 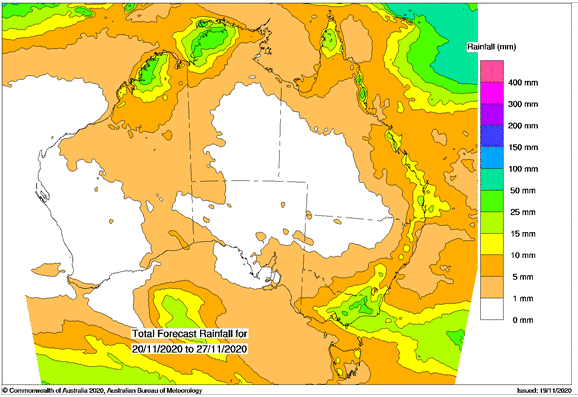