The market overall was reported in a positive light this week, however there were opposing price moves that impacted specific microns and types. In summary, fine wool was keenly sought, while wool broader than 19 MPG was cheaper, especially if it contained elevated levels of VM.

The Eastern Market Indicator (EMI) lifted just 5¢ this week to finish at 1,320¢. In US dollar terms with the Aussie dollar slightly weaker during the week to settle at US$0.775, the EMI in US¢ remained steady at 1,022¢.

At Fremantle sales, the Western Market Indicator (WMI) remained stable, losing 1¢ for the week to settle at 1,360¢.

AWI reported that growing volume of 19.5 to 23 MPG was stifling the market in this area sending prices backwards by 15 to 30 cents. Conversely, the finer end of the clip is experiencing shrinking volumes, and resulting in stronger prices in the order of 20 to 80 cents, with the 17.5 MPG the stand-out lifting 80 cents for the week.

It was interesting that AWI reported growing interest from countries other than China emerging, with the Czech Republic & India buying, while for suitable wool types Italian interest was noted. This fits with the reported improving demand conditions in the northern hemisphere as economies adjust to living with COVID-19 .

The Crossbreds steadied this week after a period of falling price levels. AWEX reported little movements in the 28 to 32 MPG categories, however the 26 MPG gave up 15¢ in Melbourne.

Cardings were mixed with the indicator down another 22¢ in Fremantle, while it was positive news in Sydney & Melbourne with prices lifting 23¢ in Sydney & 18¢ in Melbourne.

A slightly increased offering came forward with 43,940 bales offered this week after 4.4% of the original offering was withdrawn. With a 11.9% pass-in rate, 38,808 bales were cleared to the trade, 1,500 bales more than last week. The average weekly clearance for the season to date sits at 34,056 bales.

This week on Mecardo, Andrew Woods looked at production and sales of wool at the very fine end of the micron distribution. The supply of wool finer than 15 micron falls away quickly as fibre diameter reduces. In recent seasons the volume of 15 micron wool as measured by the AWTA core test volume was 18,000 bales, for 14 micron 2-3,000 bales, 13 micron 300 bales and 12 micron 100-200 bales. Production below 14 micron is very small.e

Next week there is a smaller offering listed for sale of 41,441 across the three principal selling centres. For the same sale last year just 15,375 bales were listed. All centres will sell on Tuesday & Wednesday. 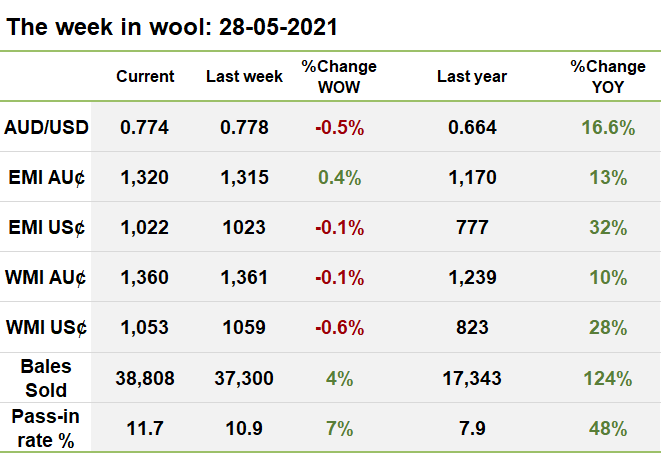 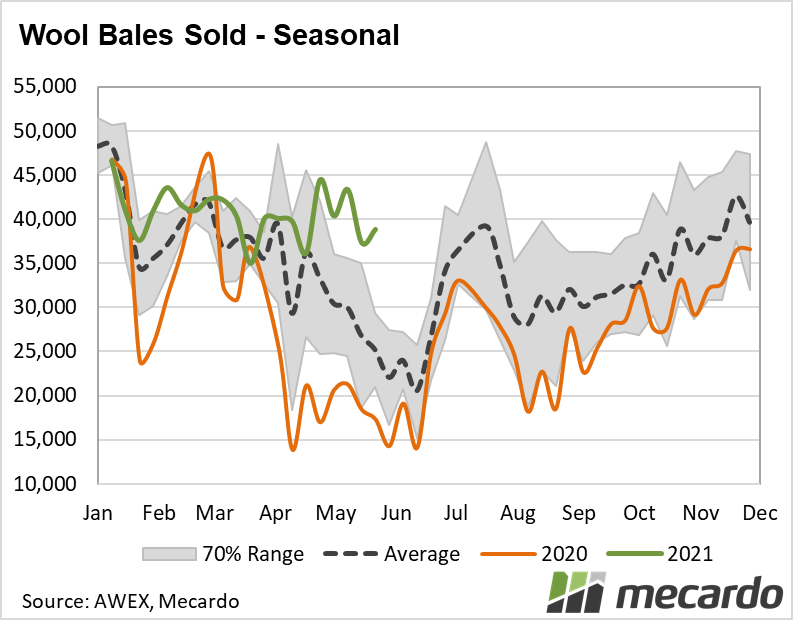