It is five months since Mecardo looked at the apparel fibre backdrop to the greasy wool market. It seems timely to check what is going in in the larger apparel fibre markets in order to provide some context for wool prices.

To recap, the world of apparel fibres is both wide and complex. Various price series for apparel fibres and the feedstocks used to develop these fibres (it is arguable that greasy wool is the feedstock for wool yarn) help to put greasy wool prices in context, as the wool market does not operate in a vacuum. Other apparel fibre prices will not necessarily tell us where wool prices are going to trade, but they will help us understand what the current dominant cycle or trend is.

In Figure 1 a range of apparel fibre price series are shown from mid-2017 to November 2020, in US dollar terms. US dollar terms are used as we are interested in the underlying price cycle as seen by the demand side of the market. To allow comparison of the various apparel fibre price series, each series has been converted to an index based on the average price for the 2017-2018 season. This puts all series on the same scale.

The rising trend shown last December has accelerated for all fibres, with prices rebounding from the mid-2020 lows far more strongly than expected or hoped for. In terms of the re-bound the three stand out fibres are acrylic, viscose and cotton which have returned to levels near peak 2018 levels. The three other fibres (merino, polyester staple and silk) are clustered together some 30% below the peak 2018 levels, around late 2019 levels. This tells us that the rise in merino prices seen since last September is a relatively moderate one in US dollar terms when viewed in context with the wider apparel fibre community.

In Figure 2 merino is compared to the price indices for manmade fibre feedstocks and an average crude oil price. Historically the merino price (albeit of a broader fibre diameter) has had a stronger correlation with feedstock prices which may have to do with their common positions at the beginning of the supply chain. In this comparison the rebound in the merino price has underperformed the oil price, MEG and Acrylonitrile (which feed into polyester and acrylics respectively). Only caprolactum, which feeds into nylon, has underperformed the merino rebound.

The other fibre price series shows that the rebound in the merino price, is not over extended in terms that is has been a moderate to average rise in comparison to other fibres. Some of the other fibres have returned to near their peak 2018 levels, which suggests they will run into resistance to further rises, and the steadying of prices generally in recent months seems to support this view.  While in comparison to other fibres there is room for the merino price to rise, although the overall impetus of the rebound from the COVID-19 2020 downturn seems to be running out. 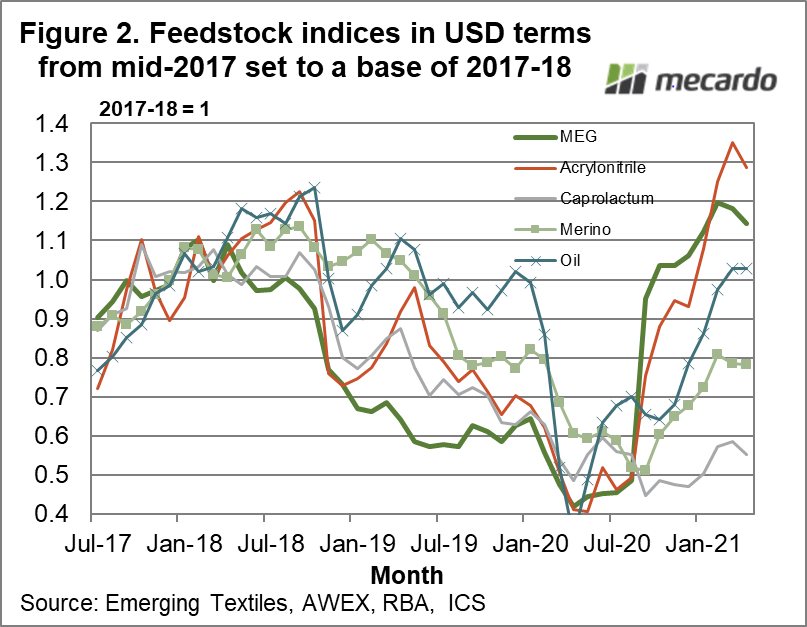