Global beef markets were already heading higher, but the announcement of the Argentinian ban on beef exports for 30 days last week sent some importing countries scrambling. Higher prices are a given with a supply shock such as this, and it comes at a time when finished cattle prices here getting tight.

Argentina plays a strong role in supplying beef to a number of countries.  The ban has reportedly been put in place to limit further rises in domestic beef prices, and to assist in limiting inflation in general.

Figure 1 shows that in the last five years Argentina has gone past New Zealand to fill the fifth spot on the list of beef exporting countries. It should be noted however that Indian beef is water buffalo, while Argentinian exports are more akin in quality to those coming from the Australian grass-fed herd.

Argentina, along with Brazil, have become major suppliers of beef into the Chinese market, with 70% of Argentinian exports directed there.  With slaughter down in Brazil, and demand still very strong due to lower pork production in China, the sudden export freeze has China looking elsewhere for beef.

To put the impact of the ban on supply into context we can run some rough numbers.  Based on last year’s beef exports, over the 30 days of the ban 64,000 tonnes carcase weight of beef has come out of world beef supply.  In April, Australia’s total beef exports were 106,600 tonnes.

China’s share of monthly Argentinian beef exports is 45,000 tonnes.  In April Australia exported just 15,900 tonnes carcase weight equivalent to China.  Its unlikely China is going to be able to replace Argentina’s volume, and the move to other markets is driving prices higher.

Before the ban was announced China had already increased bookings of US beef. In the week ending May 14th China bought over 9,000 tonnes of US beef, which is more than double the average of last year.

Export beef prices were already rising, but the Argentinian ban has added support.  Figure 2 shows the Eastern Young Cattle Indicator (EYCI) and the 90CL Frozen Cow for export to the US.  The last two weeks of the 90CL are an estimate, based on Steiner Consulting FOB US port quotes, and show a strong rally.

Lower global supplies of export beef, and higher prices are good news for Australian producers, especially in the short term.  The fact the initial Argentinian ban is only for 30 days means some of the rise could be short-lived, but plenty of commentators are suggesting it will be extended.

The general ‘bullish’ feel for global beef markets is likely here to stay for a while, however.  If export beef prices can maintain higher levels, it softens the fall in cattle markets when cattle supplies improve and the restocking boom wanes. 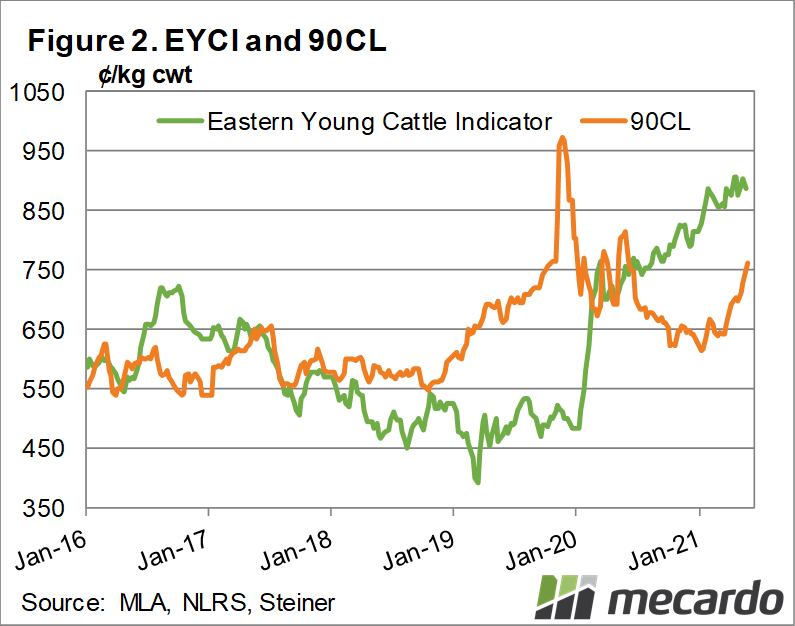