Argentina has announced that it is extending its restrictions on the export of beef until the end of October, in an attempt to keep a lid on domestic beef prices, which increased over 65% in the country since mid-2020. This will continue to constrain global beef supply, and support export prices.

In May 2021, Argentina announced that all beef exports would be suspended for 30 days, citing the rapidly declining affordability of beef for Argentinians.

After this initial period expired, this was followed up with the imposition of beef export restrictions, which included strict prohibition on the export of whole carcases, forequarters, and many other cuts of high popularity in the Argentinian domestic marketplace.

The government decrees limited Argentine beef exports to 50% of the average monthly volumes that were exported in the second half of 2020, meaning that total exports are restricted to 28,500 tonnes per month.

These restrictions were originally slated to expire at the end of August, but this week, the Argentine government announced that the export limitations would be extended again, out to the end of October.

Beef prices are a hot political topic in Argentina, and policies limiting beef exports to control food prices have been enacted several times in the past. In 2006, beef exports were banned for 180 days, and, more poignantly, the industry was hobbled by long term restrictions from 2010 until their removal in 2016 by the Macri Administration. The controls lead to a profound collapse in export volumes from over 500,000 tonnes per annum to less than 200,000 tonnes during the constrained period. (figure 1).

The Argentinian mid-term legislative election is scheduled for November 2021, so the timing of the extension on export volume limits is worth noting.

In 2020, Argentina exported around 800kt of beef, placing it in 4th place, globally, just in front of New Zealand. Argentinian beef exports prior to the restrictions were mostly destined for China, competing in this market with Australian beef and with other major customers including the EU, and Israel. The ongoing disruption of beef trade flow from Argentina may lead to opportunities for Australian exporters as customers look to find new suppliers, constrained supply will provide support global beef prices.

Argentina’s extension of its beef export ban will reduce the world export supply of beef. Most of Argentina’s exports were bound for China, meaning that other countries will need to help fill in the gap, including Australia. Overall, the extended restrictions will tighten global beef supply, supporting prices and benefiting the outlook for Australian beef export industry. 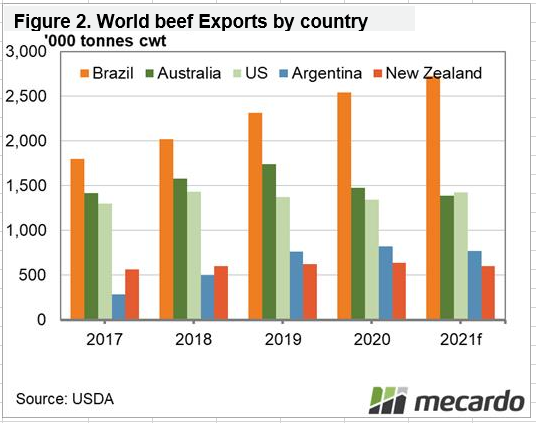