Around the World (Crop Tour in a Flash)

The wheat market is rising and falling with every twist and turn of the weather. Last week’s bullishness over hot and dry conditions in the US spring wheat areas, gave way this week to rain in the Canadian Prairies and a more favourable forecast for the Corn Belt. Not all models are on the same page though. The US model is predicting a wet Dakota, while some models are predicting that the rain will effectively stop at the Canadian border (figure 1).

The USDA released this week’s crop condition scorecard, with corn down 4% points to 72% gd-exc, spring wheat down 5% to 38% gd-exc and soybeans scored their first rating of 76% gd-exc.   Bucking the trend has been the winter wheats, which despite a tough winter, have recently had some excellent rains.  Currently rated at 50% gd-exc and building.  Current yield models are forecasting an above average crop.

In isolation, these numbers may have induced a rally on the back of deteriorating row crop conditions.  However, when broken down into the individual states, most crop conditions are rating higher than last year.  The very poor conditions in North & South Dakota are bringing the average right back.

Over the past couple of days, North Dakota has seen some storms spawn over the Eastern side of the state with very heavy localised falls –  if you were lucky enough to be under them.  The remainder of the week may see the storm lotto fill in some of the gaps.  The question will be if this rain will be enough to turn the crop around or simply buy it some time.  The fact that much of the Northern Plains have limited subsoil moisture means the crop will need more in-crop rains.

Conditions in Europe and Russia are reportedly in good condition.   Spring wheat sown area in Russia has reached 12.8m ha (courtesy SovEcon) on the back of increased cropping area but also higher than average replant due to winter kill in the Central regions.  Spring wheat in Siberia remains on the dry side and may limit how high Russian production can go in 21/22.  Russian exports are estimated at 37mmt for this marketing year, with plenty of conjecture over the Export Tax and its likely effect on the final exportable number.

French wheat is rated at 80% gd-exc and production is expected to rebound strongly from last year’s drought impacted crop.   The French crop is now expected at 38mmt, up from last year’s 29mmt.  A cool and mild Spring had delayed maturity and development of a lot of European crops, but recent warmth has allowed many of the crops to advance and catch up with average development for this time year.

It feels like the market is at a tipping point.  A shift to a warmer and wetter weather pattern in the US Northern Plains and Corn Belt could tip cold water on the commodity markets.  If we see the dry continue into July and August, things will get very interesting. 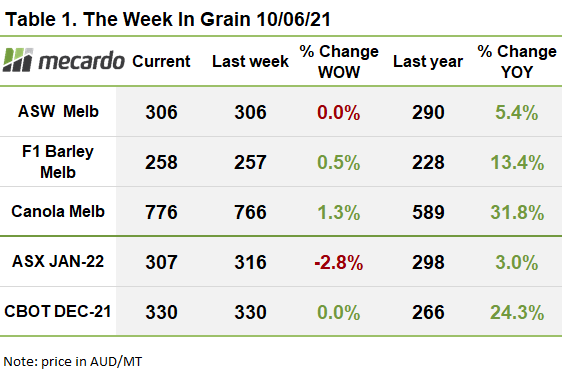 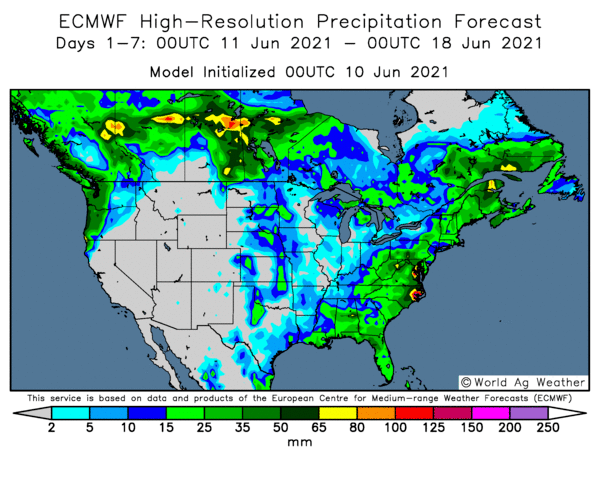