The selling week began with further uncertainty leading up to this weeks Melbourne sales as a result of Vic government interpretation of CV -19 rules. Initially the industry was told sales in Melbourne could not continue in the current location and format. This was eventually clarified and sales continued, but unfortunately the continued decline in price has added to the wool industry woes.

Falling supply in absolute terms and relative to the supply of major fibres such as cotton have been correlated with increased wool price ratios to these other fibres. With the prices for cotton and PSF flatlining, the increased price ratios have shown up as a rising trend in wool prices in recent decades. While the trend is positive, wool does have the loosest relationship of the three fibres with its trend, so prices tend to be more volatile as we have seen in recent years on both the upside and now the downside.

AWEX reported that falls in the opening day of sales in Melbourne & Sydney were in the 10 – 42 cents range, with further losses on the second day in the order of 12 – 57 cents. W.A. was more impacted with 69 – 89 cent falls on its one day sale.

Cardings again suffered a  hit, this week on average they gave up 30¢ in Melbourne & Sydney, with a 14¢ decline in Fremantle.

Next week there just 22,436 bales rostered due in part to Fremantle not selling. This will take supply pressure away from the market so based on previous results we should at least see the market hold current levels. 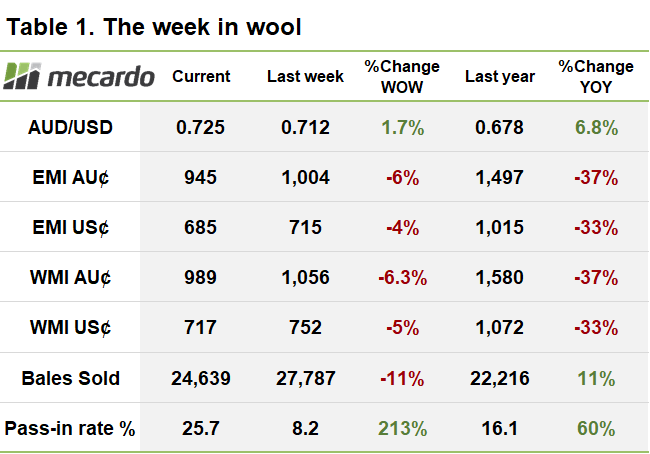