All the excitement about the wheat rally has taken the spotlight off Canola in recent weeks, which has surged significantly both abroad, and domestically.

Russia’s war on Ukraine has substantial potential to impact world oilseed markets, as Ukraine has historically supplied 55% of the world’s sunflower seed and oil, and 20% of canola exports (figure 1), most of which were delivered into the EU. A very credible concern exists in the market that preparation and planting of the 2022/23 sunflower and canola crop may be under threat, in addition to the paralysis of export seaports by the ongoing war.

Events impacting any member of the oilseed complex reverberate across the entire group of commodities. The Ukrainian canola crop is not due to be harvested till July, but farmers will still need agrochemicals, fuel and labour to look after the crop till then, and ensure a good yield.

Since mid-February, nearby MATIF canola prices have ascended a massive $AU 254 (23%) to $1,347/t. While this huge increase is not as extreme as what has been experienced in the wheat markets, what is notable is that Australian domestic physical prices have been able to more closely follow the surge compared to what we have seen in wheat markets, and have jumped $132, or 16% over the same period. (figure 2)

On the EU canola forward futures curve, similar to what we are seeing in the US Wheat and Corn markets, it is evident from the more substantial price rises in earlier dated contracts that traders are still banking on the disruptions caused by the war will have a relatively short term effect, with the worst landing in the next six months. (figure 3)

It is likely that given there is little certainty about the status of exports, or crop planting at this early stage of the war, that the full price premium has not yet been built in yet, so the market could travel further north as confirmation of disaster evolves.

At these excellent price levels, for Australian producers, it could be a tempting time to sell, either existing stocks, or forward into next season, and lock in a reasonable profit margin.

With the future situation highly volatile and uncertain, substantial risk exists of missing out on better prices if they grind higher as the war drags on, or, alternatively, squandering the current opportunity as prices could plummet if there is a surprise diplomatic solution and normalcy returns.

In addition to the effects of the war in Europe, the other influence on this market is the fortunes of the south American soybean crop in the 2022/23 season.

With the Russian war on Ukraine putting doubts over the size and future deliverability into export markets of the Ukrainian sunflower and canola crops, expected supply has shrunk, and pushed prices higher both internationally and domestically, despite shipping constraints. Time to start thinking about your canola price risk management for both stock on hand, and 2022/23, and how much volume, if any, you may wish to lock in. 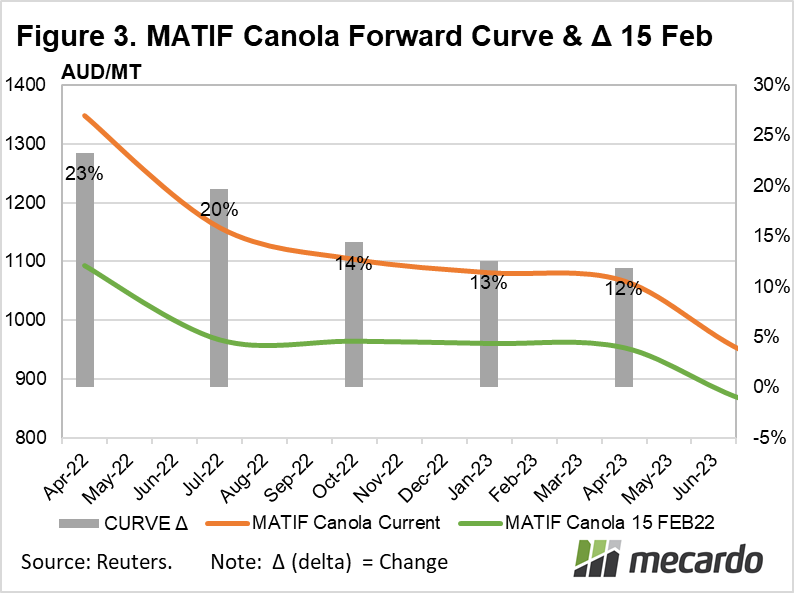