Australia is still in the grip of a cattle price boom, fueled by good seasonal conditions, strong export demand, mostly stemming from Asia’s ever-growing hunger, and a turn to health consciousness in the pandemic era. But how does the price of Australian cattle stack up compared to the rest of the world, especially our major export competitors?

Comparatively speaking, Australian cattle are still expensive on the world stage. Recent low slaughter numbers constraining supply, pushing Aussie beef to the very premium end of the price/volume stack for most export destinations, has had the effect of somewhat masking how our international competitiveness has been eroded.

Young cattle are currently trading as high as 1,055¢/kg cwt, on the front end of the trade, while heavy cattle bound for export slaughter have also reached dizzying heights of 822¢/kg cwt in recent times. At Mecardo, we estimate that processors are still losing $130 for every head of cattle they process, despite high co-product prices and strengthening export prices. Obviously, this is not indefinitely sustainable, but processing is a long-term game, with plenty of swings and roundabouts to negotiate over the cycle.

In contrast, across the Pacific in the USA, processors are reportedly making profits of over $US1,000 per head from a perfect storm of cattle oversupply due to dry conditions, coupled with labour shortages stemming from COVID-19.

The recent mad cow disease scare in Brazil, the world’s largest beef exporter, has resulted in countries that represent over 70% of Brazil’s typical export volume withdrawing their market access. The biggest player being China, typically imports over 100Kt/month. While initially thought to be a very temporary issue among the trade, with the ban expected to last just a couple of weeks, China still has not lifted restrictions. The possibility the ban may extend significantly is looking increasingly possible as weeks of no news on this front drag on. Cattle prices in Brazil have already dropped 20% since the start of September.

It is useful to compare Australian cattle prices to our competitors in US dollar terms. At US 336ȼ/kg lwt, the Aussie heavy steer price is almost significantly higher than its compatriots. In comparison, Brazil’s price of US170ȼ/kg  is 50% lower than ours, and the US choice fed cattle price at US275ȼ/kg lwt is 17% lower. In the US situation, however, remember that cattle prices are suppressed by processor labour issues, and meat prices there are historically quite high, so Australian product is probably more competitive than is first apparent when taking into account fat processor margins.

Cattle are still pricey in Australia compared to our competitors. Despite this, we are still able to shift our product, through a combination of lower volumes and solid international red meat demand.

Overall, the price differential to other major world producers is not a healthy situation, and is not sustainable into the longer term. However strong global demand for beef will mean that when the heat comes off local cattle market, prices won’t have so far to fall. 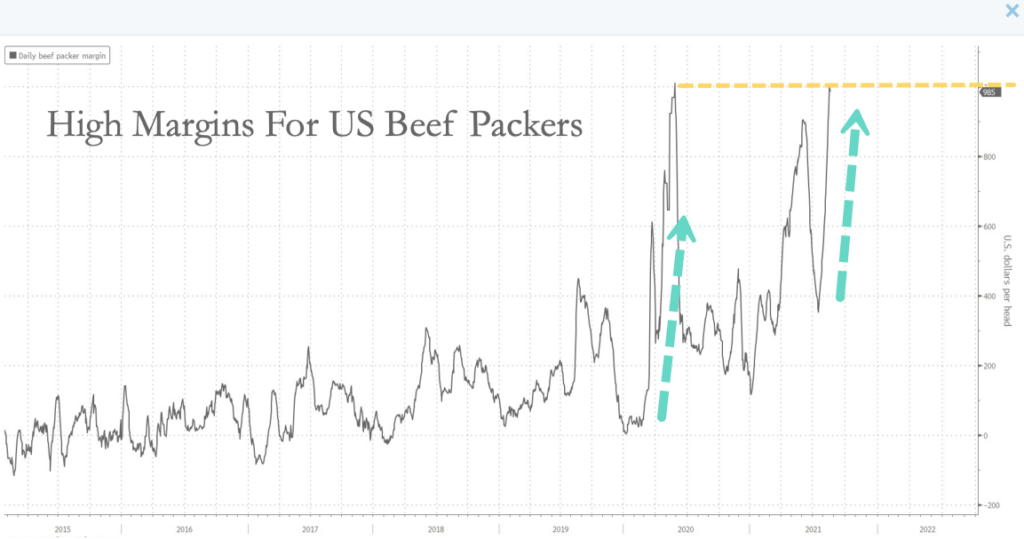