In line with declining slaughter rates, total Australian beef export volumes experienced another month on month decline of 3kt (4%) down to 76.5kt (Figure 1).

South Korea was a rising star destination, with monthly 2021 export volumes peaking for the year in March at 16kt, which was 17% above average; but export quantities have been on a downward trajectory ever since, falling to 12.5kt in June, 14% below average (Figure 2).

Beef exports to the Philippines  were tracking at 30-50% above the five-year average in March and April this year (Figure 3). Much of this was driven by an African Swine Fever (ASF) outbreak fuelled pork crisis that lead to government intervention via price caps on pork. However, it’s clear that since the government enacted measures to boost pork supply, by increasing import quotas which suppressed high prices in the county, the explosive increase in demand for Aussie beef has waned and is unlikely to return. Export volumes to the Philippines have been  35-47% below the five-year average over the last two months.

There has been a 22% increase in the benchmark US 90CL frozen cow price over the last few months (Figure 4).  Looking at export volumes to the US it is clear that supply is the issue. Aussie beef export volumes to the US remain around 50% below the five-year average volume. This suggests that the US market still has a way to go for it to pay sufficient premiums to entice significantly more Australian cattle to be directed into the grinder. The question is whether US beef buyers will meet the market, increasing prices further and import volumes before supply issues in the US or demand eases (view article here).

While Steiner reports that the US Choice beef cutout has declined by $55, or 16% since early June, the change has been in higher value steak cuts, not grinding beef, and domestic US 90CL is currently operating at the largest discount to imported prices seen in 20 years. Furthermore, Steiner reports that there is significant speculation among US buyers that imported 90CL prices could reach $3/US per pound, equating to a rise of 10% to $8.80 AUD/kg before long, which is an encouraging sign for exporters like Australia.

Counterbalancing this short-term optimism is the contention that the current strong beef demand situation in the US is largely driven by higher consumer discretionary spending during the grilling season as the country eases Covid-19 restrictions. This driver is likely to fade, and with it, some of the additional beef demand. As such, it’s just a question of when and how rapid the decline will be.

The volume of Australian beef exports has been declining as a result of tight supply of cattle, leading to low slaughter numbers, coupled with resistance by our export destinations to pay the resulting elevated beef prices.

The US’s limited capacity to draw in more Aussie beef imports at recent values suggests that offered prices may need to increase for them to secure more supply in the short term. However, rectification of the labour related beef supply bottleneck could push US prices lower, and with it, appetite for high priced Australian beef. 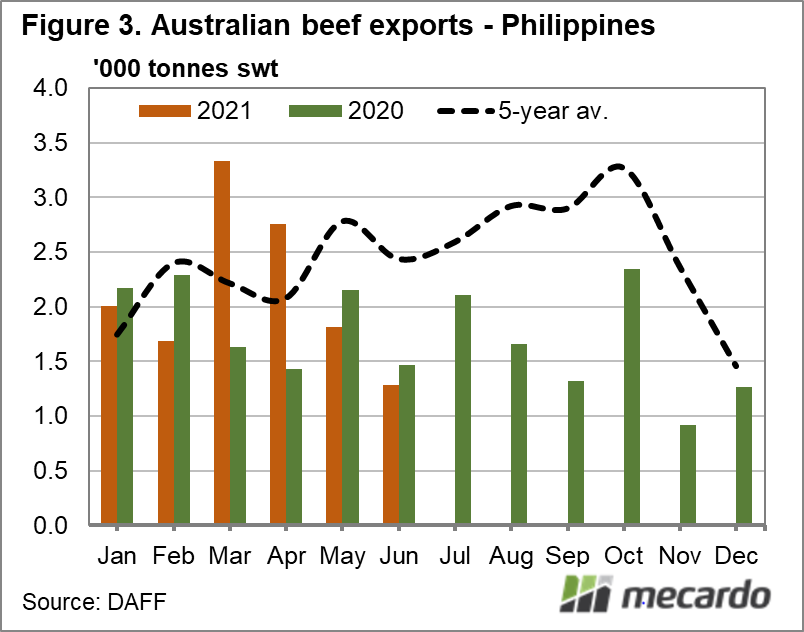