Not everything in the world is in thrall to the pandemic, with the Australian wool clip continuing to broaden due to the improved seasonal conditions in 2020. This article takes a look at the broadening trends in AWTA and auction data to November.

AWTA core test volumes are the purest hard numbers on Australian wool production, as most wool is measured before sale (one of the enduring positive legacies of the Australian Wool Corporation from the 1970s and later in the 1980s with staple measurement). In Figure 1 the year on year change in November volumes (farm bales) are shown along with the year on year change in the three months to November by micron category, with the total change (all microns) shown on the very right hand side of the graph.

While the overall change in AWTA volumes for both November and the three months to November was close to an eight percent fall, the changes between micron categories varied greatly. 19 micron and finer volumes all fell, with the fall increasing for the finer micron categories. The contrast with 21-22 micron volumes could not be more marked, with volumes for these two categories up by 40%. On the broader side of 22 micron the change in volume alters again, with 24-26 micron volumes down by nearly 40%, 27-30 micron down 7-9% and greater 30 micron up by 6-9%.

One drawback that the AWTA data has is that it blends wool from all breeds. To look at changes in micron category by breed we go to auction data. While this will not capture all wool sold in Australia (such as the 12-13 micron wool which seems to be mainly sold outside of auction) it will capture around 85% of production which gives a good idea of what is going on. Figure 2 shows the year-on-year change in merino volumes by micron.

The rise in broader merino volumes shows up clearly in the auction data, peaking for 24 micron (still small volumes) which was up 327% in November. The old story about averages where with one foot in iced water and one foot in hot coals, on average, your feet will be at a comfortable temperature reflects the change in merino volumes. While on average volume is down slightly, the changes between micron categories range from a 62% fall (14 micron) to a rise of 188% (24 micron) during the past three months.

In Figure 3, the year-on-year change in crossbred combing auction volumes by micron from 19 through to 40 micron is shown. Crossbred combing wool also exhibits a broader swing, with sub-29 micron volumes down, while 32 micron and broader volumes have generally risen, with the rise increasing through to the mid-30s micron categories. Beyond the mid-30s micron category volumes fall right away, so it is easy to have big swings in sales volume (as is the case for 19-20 micron crossbred volumes); but there has been an increase in sales despite the depressed price levels for these micron categories.

The schematics in this article are a good illustration of why swings in production affect relative prices in the greasy wool market. Changes in total volumes mask a lot of the big changes in supply, keeping mind that “wools ain’t wools” where, for example, a shortfall in fine merino wool cannot be plugged with broad merino or crossbred wool if you want a satisfactory result. 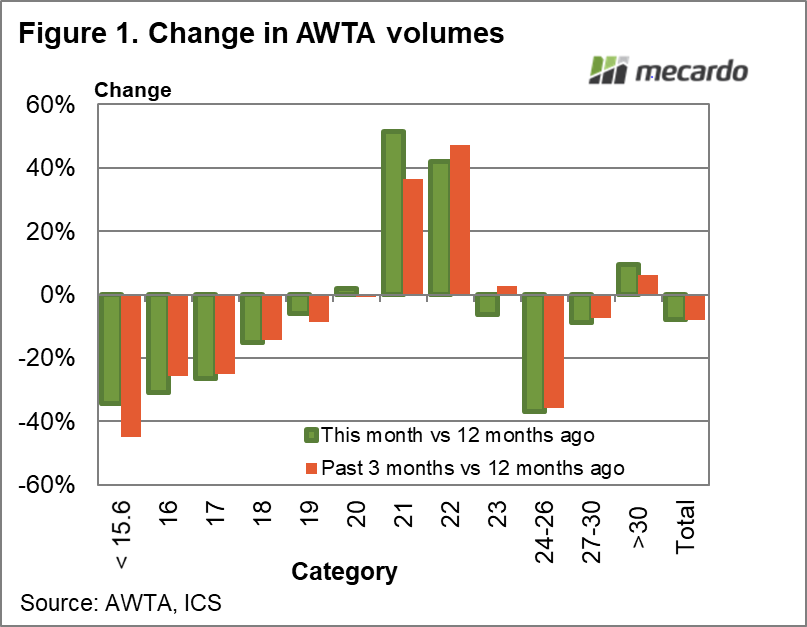 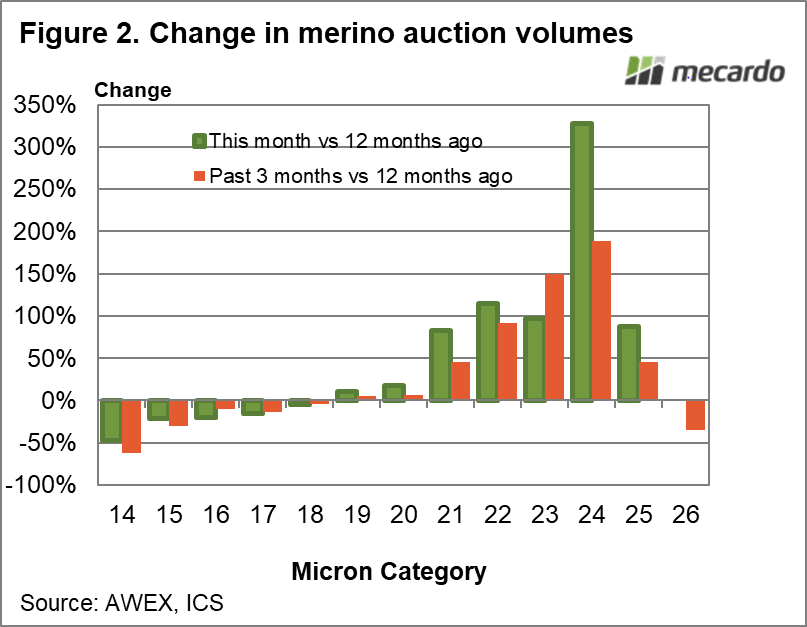