The new year wool sales have opened, and again it is the dominance of China that is driving the early sales. This is no surprise as the trend of increased export volume (and value) to China has exhibited a consistent and sustained pattern. China wool demand will be the key element in the fortunes of the wool price in 2021. To understand this potential, this article takes a look at the growth of China as our most important wool destination.

The first exports of wool to China started more than half a century ago, with some records dating back to the 1920s, and today it is Australia’s largest customer, taking on an average of 78% of the wool clip between 2017–19.

While China processors import about 50% of the world’s wool production each year, Australia represents about 75% of China’s total wool imports.

Prior to 1980, Australia shipped less than 10 million kilograms (mkg) greasy each year to China, as China’s small wool textile industry was largely supplied domestically. As one of the world’s largest producers of wool and boasting one of the largest sheep flocks, the growth in Australia’s exports to China mirrored the growth in China’s wool processing capacity since 1980, and have continued to grow with a mutual reliance underpinning the relationship.

The trade has expanded substantially since 1990 when China accounted for only 4% of Australia wool exports. In fact, in 1992 China wool imports totalled 114 mkg Greasy, while Italy, as the largest wool buyer, imported 122 mkg. This however, was the tipping point and since 1992 China has been easily the largest greasy wool buyer of Australian wool every year.

While China has become the dominant partner for Australia’s wool in total over the past five decades, there has also been a significant trend towards China buying more fine and superfine wool from Australia. In 2017, 47% of Australia’s wool exports to China was 19 micron and finer wool. This compares with 10% in 2000 and only 3% in 1990.

The share of wool exported to China has steadily grown from 37% of volume in 2001 to stabilise around 77% to 80% since 2010. In April 2020 this jumped to 93% as COVID-19 impacted other export destinations of Australian wool, while at the same time China appeared to be managing the COVID-19 impact.

The recent announcement of a 5% increase in the China tariff-free quota, overlaid with strong GDP growth as China manages the COVID-19 pandemic, provides optimism that the strong open to wool sales will provide a platform to recovering the ground lost in 2021.

Already, the reduction in supply of fine wool post drought has seen this market sector out-perform the rest of the market. Any increase in demand will see this sentiment translated to the general wool market, as although some modest building of stocks occurred last year, supply will remain constrained on account of the low flock numbers. 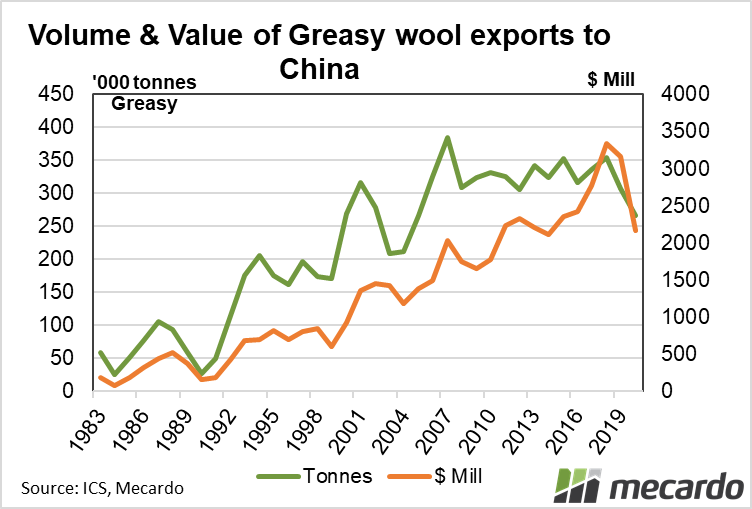 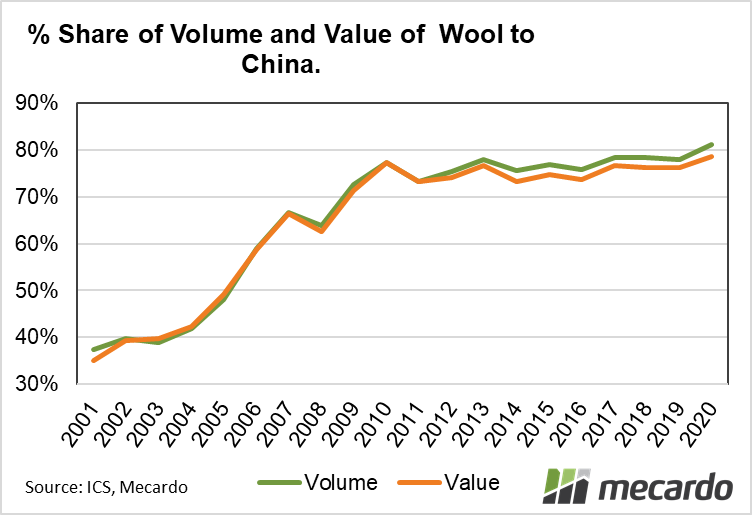