AWTA volumes – are stocks going to be a problem for the wool industry?

AWTA core test volume finished the 2019-2020 season down by 7.4% in farm bale terms, closer to 8% in clean weight terms. Given the run of recent seasons, this is a reasonable result. This article takes a look at the full season change in volumes by category and finishes by putting the increase in farmer stocks this season in a longer term perspective.

AWTA core test data is available on the excellent AWTA website. There is two decades of monthly data available through the web tool.

There often seems to be some tension between the year on year change in volume and the overall volume of greasy wool, given that the overall volume has fallen markedly in recent decades. This drop in wool volume is accentuated by the increase in volume for the major apparel fibres during the same period.

In Figure 1, the change by micron category, and cardings with the total change shown on the right hand side of the horizontal axis for the 2019-2020 season is compared to last season (2018-19) and the average volume for the past five seasons. It shows that there has been little change in 18.5 micron volumes, either year on year or compared to the average of the past five seasons. However, as the micron moves away from the 18.5 micron category the change in volume increases, becoming more complex for the finer Merino categories.

In 2019-20 the supply of fine (finer than 18.5 micron) wool fell but remains up on the average of the past five seasons. Given the run of dry seasons, it makes sense for the volume to be above the five-year average. On the broader side of the Merino average, the broad Merino micron category volumes fell in 2019-20 but it is the fall on the five-year average which helps explain the extraordinary run for broad Merino prices in recent years.

Figure 2 shows the full season AWTA volumes (farm bales) from 1991-92 to the current season. After trending lower from the early 1990s, the volume steadied in 2009-10, around 2 million bales. This volume finally fell in 2018-19 under the pressure of poor seasonal conditions, falling again this season by 7.4%.

As an exercise in perspective, the estimated increase in farmer held stocks for the past two seasons (around 300,000 farm bales) has been added to the 2019-20 season volume. The addition of the farmer stocks brings the total supply back up to near 2 million bales, where the Australian supply has spent the past decade. While COVID-19 has not finished yet and stocks levels are likely to increase again this season, current farmer held stocks will simply top supply up to recent levels.

In 2019-20 AWTA volumes were down year on year for nearly all categories. The drop in demand from pandemic lockdowns has come at a time of falling wool production. The increase in farmer stocks of greasy wool will slow the subsequent recovery down but at this stage, they only fill the gap in supply caused by drought in the past two seasons. This implies the recovery in wool prices post-pandemic will be faster than expected. 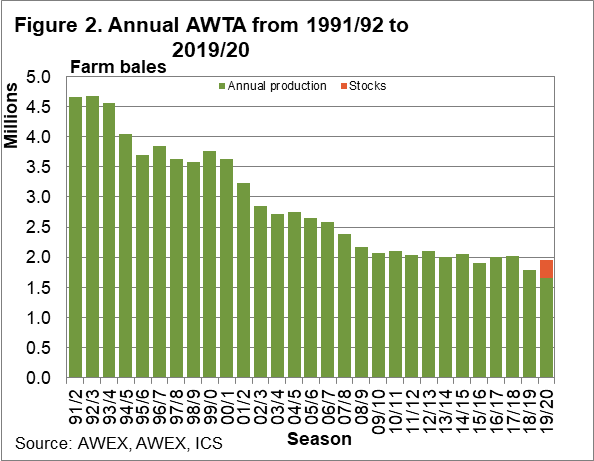