Wool production in Australia is currently quite varied when broken down into micron categories. This will be challenging for the supply chain which effectively assumes production will be similar to year earlier levels. With this in mind Mecardo looks at the latest AWTA volume data.

Figure 1 shows the change in AWTA core test volumes by micron category (less than 12 micron to 30 micron and greater) for the three months to April (February to April). In addition the actual volume in farm bales for this three months period is overlaid in Figure 1 to allow a quick reference to the volume weighting to be given to the changes shown. The 19 micron category is the largest in the Australian wool clip, so changes in volume for the micron categories around 19 micron have the largest effect on overall volume.

Figure 2 breaks the volume changes shown in Figure 1 into eastern and Western Australia. As noted in January, there is a marked difference in the supply trends between the two regions. The Western Australian clip has continued to broaden on the back of improved seasonal conditions during the past year, whereas the eastern clip has exhibited a pattern of a fining merino clip and increased crossbred volumes.

The change in volume in farm bales for the two regions is shown in Figure 3. As expected Western Australia has little influence on crossbred volumes, they are an eastern story. However in the merino micron categories Western Australia has had a big influence, negating the drop in eastern 20-21 micron volumes and dragging 17-18 micron volumes lower.

The influence of the western clip wanes from now through to September, as shown in Figure 4 for 20-22 micron wool specifically. This means that Western Australia will not be able to cover any falls in the eastern clip volumes as comprehensively as it has done so far this calendar year. This should put some pressure on the market to reduce the gap in price between the broader merino micron categories and 19 micron.

Volume changes by micron in the overall merino in the next couple of quarters are hard to call. The influence of Western Australia will diminish as is normal at this time of the year so if the eastern clip continues to fine up (that in itself is surprising given the seasonal conditions in NSW) we will see the effect reflected in the national clip – less broad merino and more fine merino. Such a scenario would put pressure on the micron curve to flatten (micron premiums and discounts to narrow). First things first though – we need to see how volumes change. 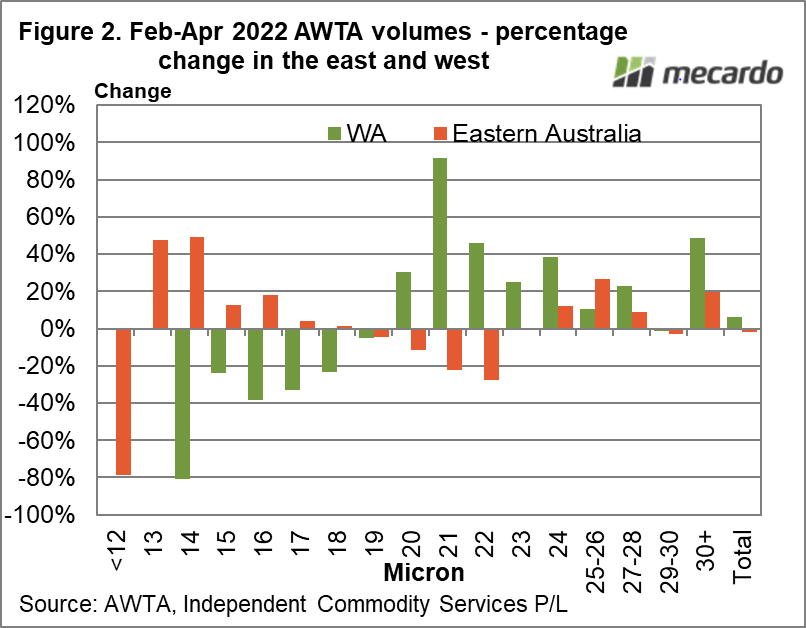