The latest Australian Wool Testing Authority (AWTA) core test volume data confirms the change in direction of the drift in the merino fibre diameter distribution evident during the past 15 months. This article takes a look at the eastern and western AWTA numbers.

The AWTA has added a new report combining the core test data with the wool statistical area attached to each lot of wool, which allows a look at production (rather than sales) by wool statistical area. The reports are available at AWTA website and are in graphic form. There is an interesting schematic which shows the changing volume for Australia from the mid-1990s onwards.

Last week Mecardo looked at the year on year change in the merino average fibre diameter, showing how it had switched from increasing to decreasing (using auction data) earlier than anticipated. The October  AWTA core test data lines up with the auction data. Figure 1 shows the 3 month smoothed year on year change in AWTA volume by micron for eastern and Western Australia, to October. The change is smoothed by three months to reduce the effects of rainfall delays and recesses for the year on year comparisons.

Note in Figure 1 how the eastern volumes for 21 and 22 micron are lower than a year ago, with the volumes for 20 micron and finer all up. In Western Australia the fibre diameter is still broadening, with big increases in 20 to 22 micron wool and increasing falls in volume for 18 micron and finer wool. Crossbred volumes continue to be well above year earlier levels in both regions.

The contribution of Western Australia to the national clip also varies by month. Figure 3 shows the average proportion of 18-22 micron wool tested by the AWTA in Western Australia by month during the past decade. In the March quarter Fremantle wool accounts for one third of 18 to 22 micron wool, with the proportion reaching a minimum in the period from May through to August

The swing broader in eastern Australian wool following the break of drought in early 2020 has ended up in auction sales and also now in the AWTA core test data. For the time being a broader Western Australian clip will help support the supplies of broader merino wool, through to late autumn. Under this scenario we will see increased fine merino volumes and a mixed result for medium/broad merino volumes in the next couple of quarters. 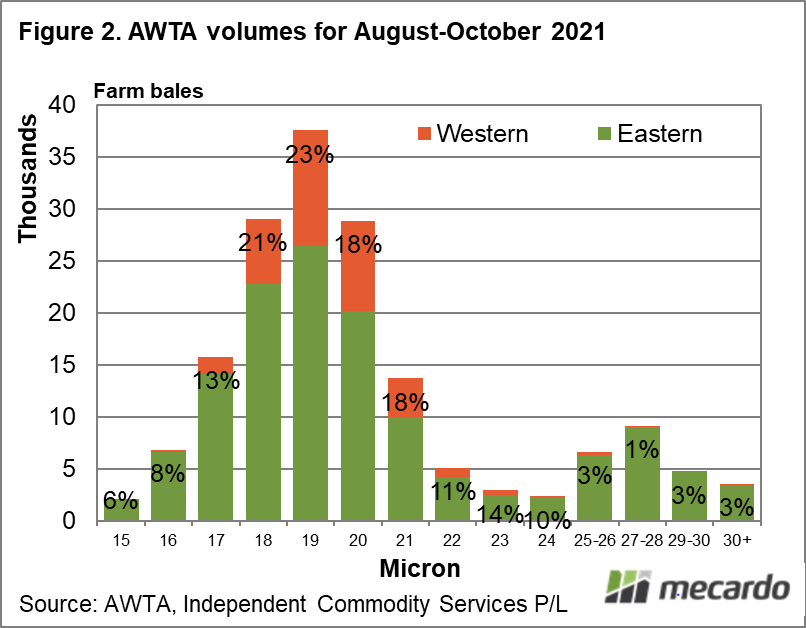 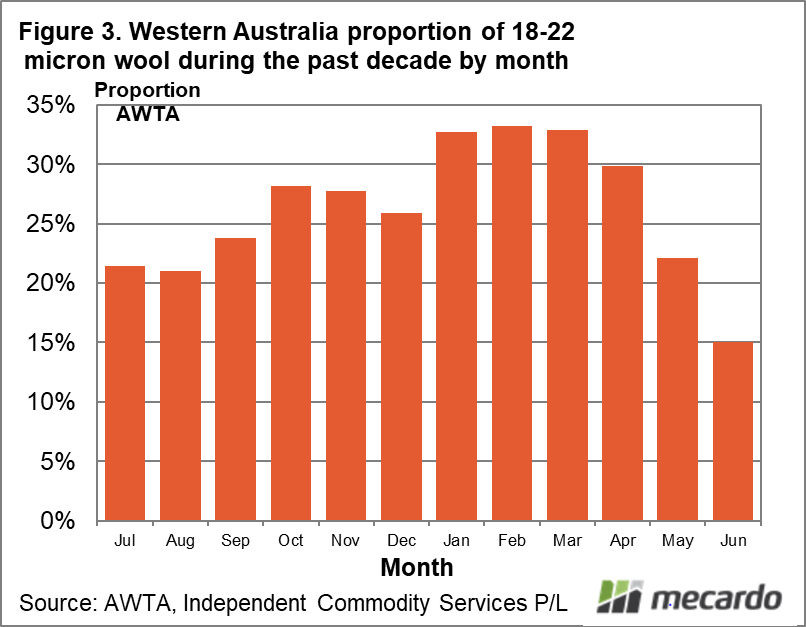