Barley off the rollercoaster

Figure 1 shows that over the last 12 months Chicago corn prices have had a very solid rally, with the spot contract more than doubling, before the switch over to the new crop contract saw the recent fall.

New crop corn is 57% higher than this time last year in US terms.  Chicago Soft Red Wheat (SRW) has also rallied over the last 12 months, but ‘only’ 40%.  In our terms SRW futures are close to $350/t, while corn futures are just above $290.  Apart from recent highs, corn hasn’t been this strong since 2013.  US feed consumers are no doubt hurting.

Rising international prices have had very little impact on local markets.  In fact, looking at figure 2 compared to figure 1, Australian prices look to have gone the other way.  Falling wheat and barley prices this time last year were due to the improving season, along with the Chinese tariff issues.

The big Australian crop saw price fall back to export parity, but they haven’t rallied in line with US prices over the last few months.  Compared to this time last year, Geelong ASW is 20% stronger, while barley is at about the same price.

With Australian barley now close to $30 cheaper than corn it makes it a reasonably cheap feed grain.  New crop barley is at a small discount to old crop, at a $40 discount to corn.  Wheat has rallied recently with Geelong old crop ASW at a $20 discount to SRW, which is still historically cheap in international markets.

When we compare local wheat and barley markets, barley is also looking cheap.  Figure 3 shows the wheat premium to barley, and it has recently moved back to $75 which is at the top of the historical range.

Barley is cheap compared to both international feed grain markets, and local wheat markets.  Not many growers will be forward selling at current prices, but consumers can use ASX Barley futures to lock in prices.

There is a good chance that barley prices will improve with export demand, and local feed demand, as it is now relatively cheap on an energy basis. 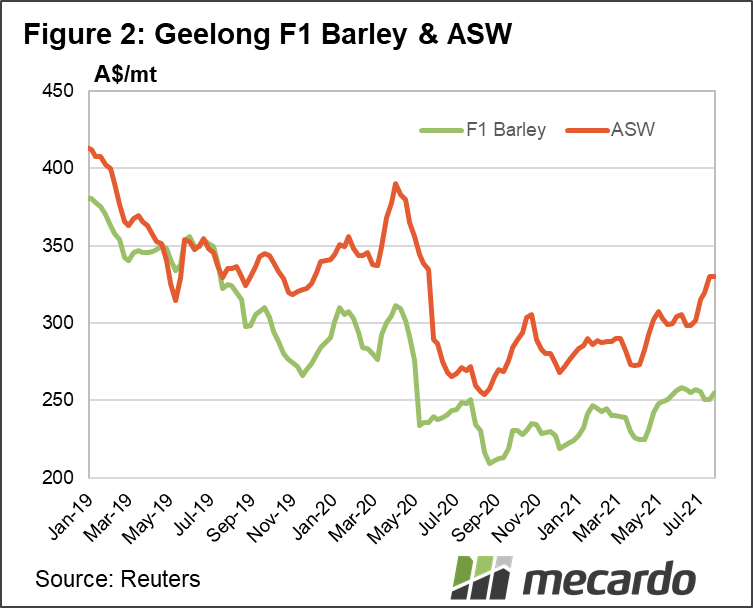