Despite dropping out of the news cycle, the tariffs imposed by China on Australian Barley exports continue to impact the market. As always, what is bad for grain producers is good for consumers, who can look forward to cheaper feed grain over the coming year.

New crop barley prices were already on the slide before China slapped a tariff on Australian exports. Barley prices, did however, react strongly in mid May, initially dropping $30 per tonne, or 12%, before recovering around $10.

Since the end of May, east coast Feed Barley prices have sat in a relatively tight range of $230-250/t.  In the west, prices have moved in a similar fashion, although proximity to export markets has prices a little higher. Barley prices are not disastrous, with figure 1 showing they are still around $80-90 per tonne above the dire levels of 2016.

Wheat has shown a little more volatility so far but is sitting pretty close to it’s May levels. The rally in Chicago Soft Red Wheat on Friday night saw ASX East Coast Wheat trade at $300/t, which has been solid resistance since May. Rising international wheat values has pushed ASX Wheat up $20 from the lows of the end of June.

So, onto the spread. The wheat/barley spread is a measure of the relative supply and demand situation for the two grains, and acts a proxy for the milling wheat premium to feed grains. Demand for feed barley was reduced due to the tariff, and this saw the wheat/barley spread fall to $70 per tonne in May, and now sits at around $60/t.

Feed Barley is currently close to about as cheap as it gets with a normal crop.  The wet harvest of 2010/11 was an exception. In 2010/11 rain damage saw much of a very large wheat crop downgraded to feed, leaving tight supply of milling wheat, and an oversupply of feed. The risk of a wet harvest has seen buyers unwilling to lock in narrow feed spreads on multigrade contracts ever since.

Feed consumers can, however, use ASX Feed Barley Futures to manage some upside risk in feed grain prices. It doesn’t look like China is going to lift tariff’s any time soon, but there is always the risk of unexpected occurrences seeing prices rise.

There is still plenty of water to go under the bridge, or more accurately, fall out of the sky, before the crop is in the bin. This goes for local feed markets as well as northern hemisphere spring crops. As such feed grain consumers might consider locking in some of their requirement for the coming year at what are now three-year lows.

Buying ASX Feed Barley at $240/t will result in a delivered feed barley price of $255-260/t from February onwards in major consumption zones. Obviously, prices will be much cheaper at harvest, and upcountry this year if the expected large crop comes to fruition. 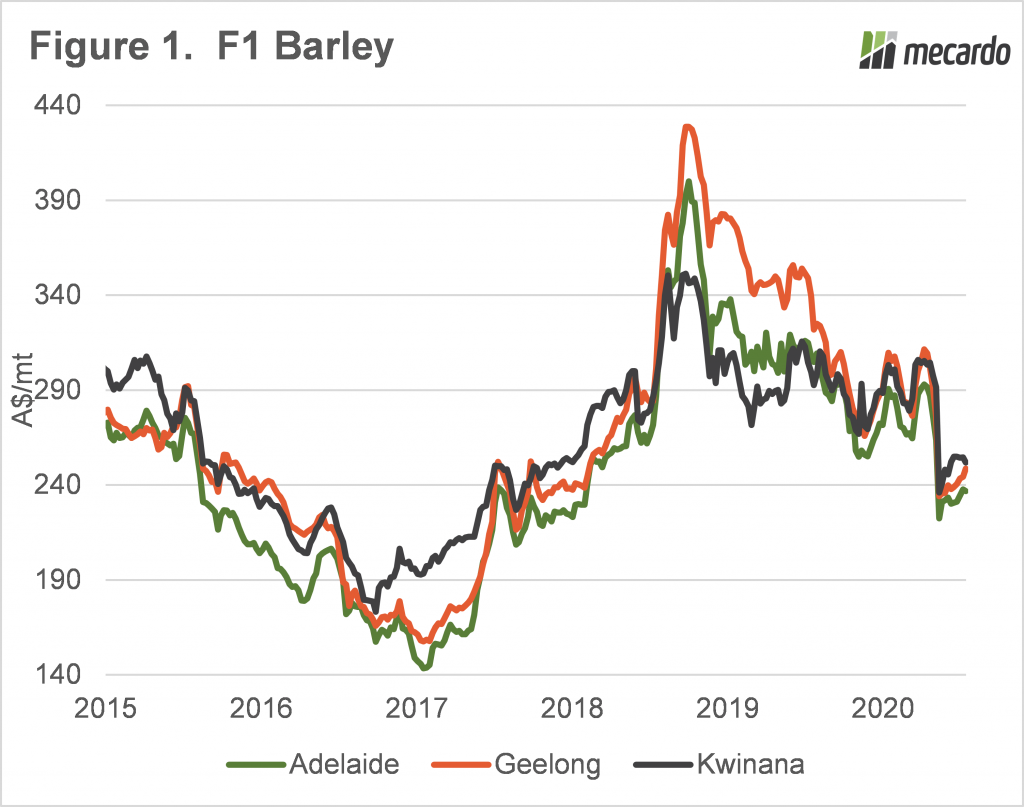