The pandemic has helped to intensify the issues surrounding shearer numbers and availability during the past two years. Mecardo thought it was time to check back on beer, shearing and wool price trends

As noted in an earlier article on this subject in 2017, despite the concern shown in the industry through time about the availability of shearing teams and the cost of shearing, the available data is limited, especially where the effective cost of shearing is deviating from the award rate (view here).

Data for beer prices has been sourced from the ABS, while award shearing rates were used to update the data from our previous research. In addition, an award shearing rate plus 15% has been added for comparison, as anecdotal evidence (the lack of data again) points to plenty of sheep being shorn at above award levels.

Figure 1 shows indices for beer and shearing, based to 1987 and running through to 2021, with an extra series as mentioned above to show where the award plus 15% shearing rate sits. The award rate for shearing continues to lag the beer index while the award plus 15% goes a long way to narrowing the gap, although it will depend on what sort of beer is being imbibed. In this schematic the beer index is a rough proxy for the cost of living, so the award plus 15% makes sense as a way of maintaining a living standard. Some data on the distribution of annual incomes for shearing staff would help greatly in discussing how to improve the industry.

Wool rooms come in a range of shapes, arrangements and levels of maintenance which, when combined with the type of sheep being shorn, impact on the full cost of shearing. With this caveat in mind a full contract shearing cost has been calculated assuming it is 2.25 that of the actual cost of shearing a sheep. This calculated cost of contract shearing is then expressed as a ratio of the average Merino micron price net of wool tax, from 1987 onwards. A rolling eight year average is overlaid to show the trend in this ratio, which is moved around by swings in the wool price. Since 1987 the ratio has averaged 50% (it has cost around half a clean kg of merino wool to have the wool shorn, prepared and baled from a sheep). The cost plus 15% takes this ratio back up to 55%.

Limited availability of shearers has allowed the shearing rate to increase, beyond award levels, helping to close to the gap to beer prices which had widened out during the past three decades. It is hard to entice people into the industry if they have trouble buying a beer 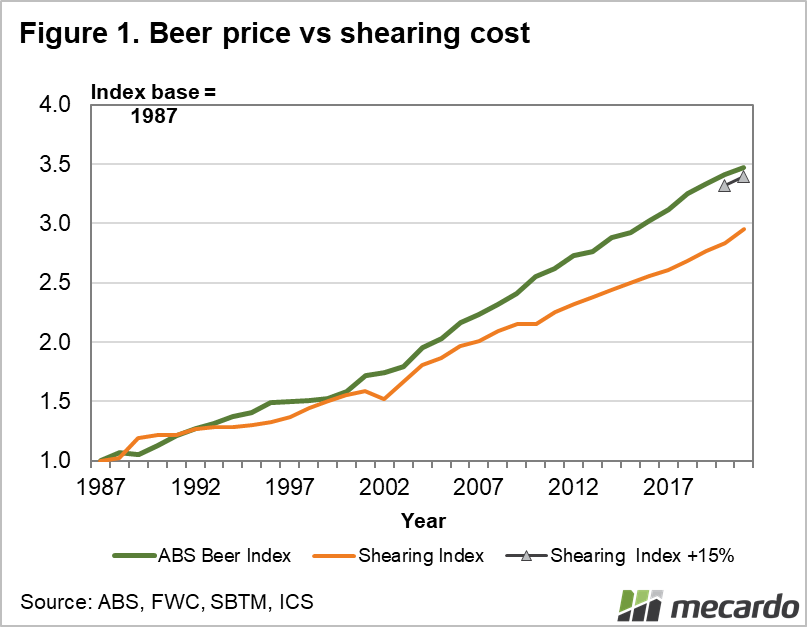 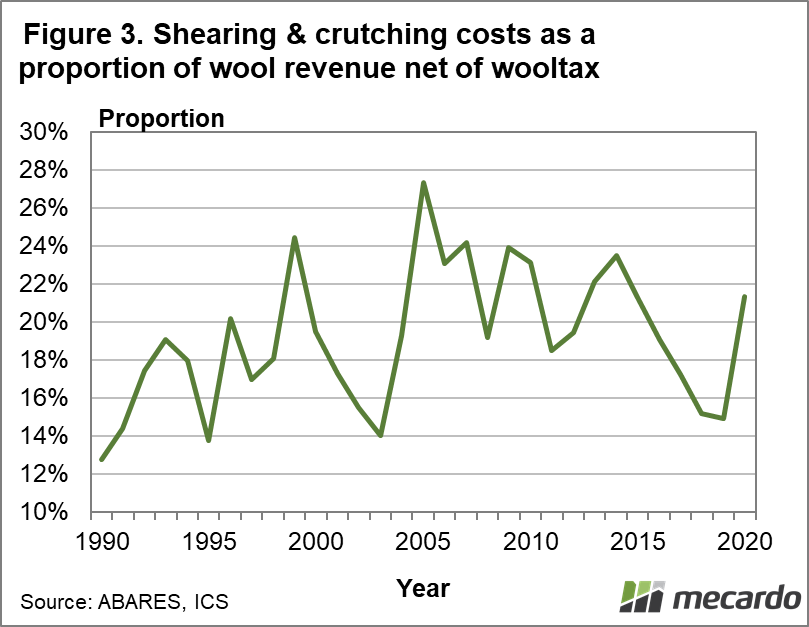