The second last sale of the 2020/21 wool season started with a large offering but minimal price movements, mostly in the downward direction, although not as harsh as the previous week. AWEX reported that the West showed signs of improvement late on Tuesday which carried over into stronger buyer sentiment on Wednesday.

Despite the mid-week improvements in the market, the Eastern Market Indicator (EMI) lost 3ȼ over the week to settle at 1,420ȼ. The Australian dollar also fell to US$0.7463 which put the EMI in US dollar terms down 10ȼ to 1,060ȼ.

The west managed to buck the trend and improve on the week. The Western Market Indicator (WMI) lifted by 2ȼ to finish at 1442ȼ.

In a reverse of recent trends, it was the medium microns that outperformed the finer end of the wool clip. Lifts in Melbourne were recorded for the 19-22 MPG indicators from between 1 & 36ȼ.  In Sydney the 19.5 & 20 MPG indicators fell by 11ȼ each whilst the 21 MPG lifted 10 ȼ.

It was all downhill for crossbreds, losing between 15 & 27ȼ across Sydney & Melbourne.

Cardings moved 2ȼ up in Melbourne but fell by 6 & 1 ȼ in Sydney & Perth respectively.

This week on Mecardo, Andrew Woods looked at Merino wool prices in relation to major apparel fibres and according to his analysis, Merino wool prices are “about right” in terms of their historical relationship to other fibres (view article here). With plenty of room to move up higher or lower (the average merino micron price, 19 MPG, is currently at the 55th percentile ranking for the last 5 years) the apparent plateau the market is experiencing could just be a resting point on its way up further, hopefully not the other way.

Next week will be the final sale before the annual 3-week recess. Like this week we also have a very large offering, 51,327 bales rostered to sell across all three centres on Tuesday and Wednesday.  With another large offering on the cards, it will be interesting to see if the approaching break will be enough to pull the market back up as buyers secure wool to fulfil orders. 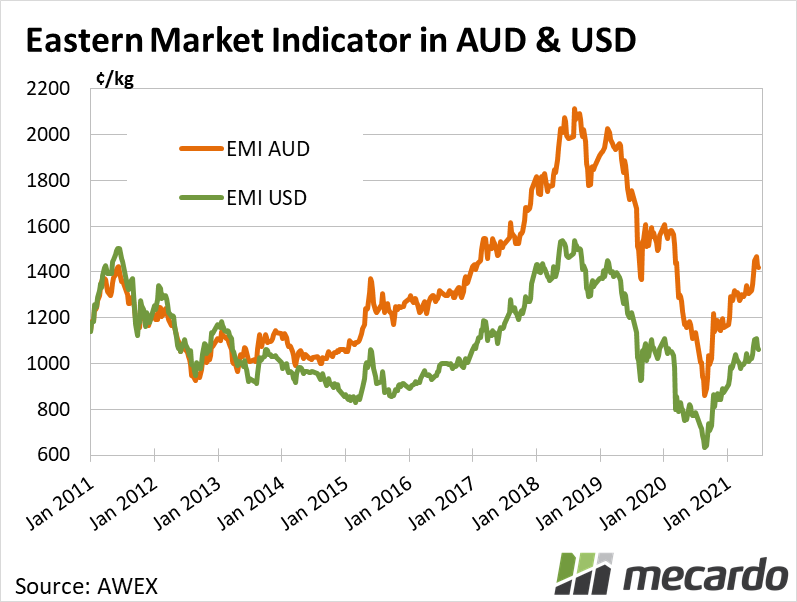