While the World Animal Health Organization (OIE) and China are comfortable with atypical Mad Cow disease being found in Brazil recently, other countries are not, with Egypt, Saudi Arabia and Russia among others banning imports of Brazilian beef.

Regardless of the official scientific opinion on Brazilian beef from the OIE and others, one thing is certain, the Brazilian beef brand has been damaged, and other countries are moving to be seen to respond to concerns.

While appearing to be significant news, these five additional countries make up about 13% of Brazil’s 2020 export volumes (figure 1), as Brazil’s customer portfolio is well diversified, encompassing 129 separate countries.

China historically represented 62% of annual beef exports, but it is still suspended, meaning the sum of banned destinations is now over 75% of Brazil’s total export market.

Suspending imports from Brazil is a serious matter for Egypt, that would not have been taken lightly, as it sourced 56% of its imported beef from Brazil in 2020. (figure 2)

Brazil is also a major beef supplier of Saudi Arabia, accounting for 38% of total imports in 2019 (figure 3), however,  the bans only applied to facilities in Mato Grosso and Mineas Gerais states.  Australia has exported around 8kt to Saudi Arabia in 2021 so far, at an average price of $12/kg swt.

On the Chinese front, all seems to be silent, but recent reporting on Reuters suggests that disputes are brewing between Brazil and Chinese customs authorities about the status of Brazillian beef en route during the ban period. Brazil was allegedly still sending beef cargoes to China as late as September 9th, but it’s looking very possible that beef will either be sent back, or have to be re-routed to other markets that will accept it, as China is reportedly refusing to accept shipments made after September 3rd. The volume of beef that may be impacted is possibly up to 30,000 metric tonnes swt.

If the Chinese trade ban drags on beyond the original 14 days, the date of which is September 19th, there is the possibility more countries will pile in to impose suspensions on Brazilian beef imports in order to keep up with the expectations of their citizens.

The developments in this situation should be monitored closely as more information comes to light. Just at the time of publishing this article there were early reports that the Saudi Food and Drug Authority (SFDA) have lifted the ban, which Mecardo has been able to confirm.

Egypt and Saudi Arabia are among Brazil’s largest non-China customers for beef, but by themselves represent a relatively small amount of Brazil’s well-diversified international beef customer portfolio. The significant development here is that the situation may not be as innocuous and resolved as was thought, and that the bans, including China’s, could drag on for longer, driving other countries to follow suit. This will support global demand and prices for non-Brazilian sourced beef, which can only be good for Aussie processors and producers. 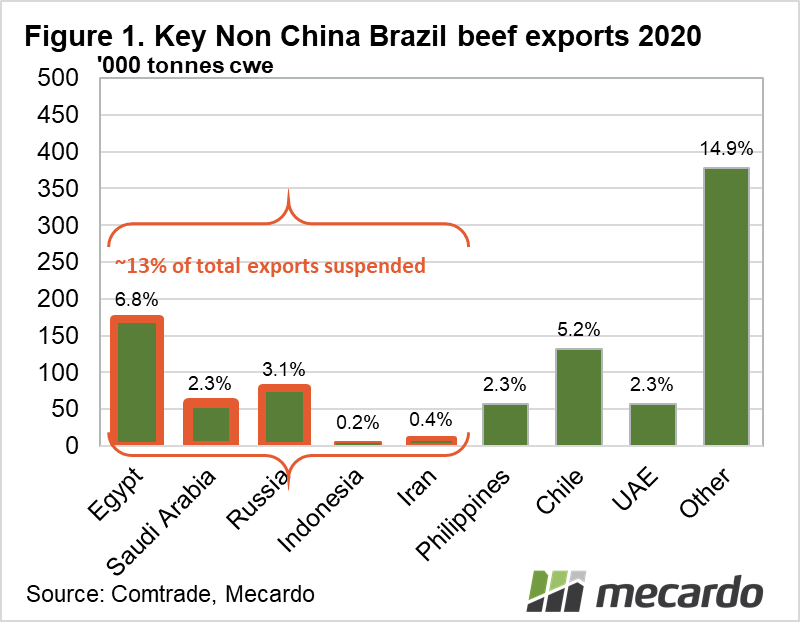