Australian beef exports experienced an uptick in September, but remain well down for the year to date. Year on year, total beef exports for January to September are 17% lower. To put this into perspective however, total beef production in Australia for the year-to-June (latest data available), was 19% lower, showing demand is keeping pace with, if not overtaking, supply.

Total beef exports in September were up 3.5% on the previous month, to 79,843 tonnes. All major markets – in the US, Japan, South Korea & China – lifted their intake of Australian beef, with the US having the biggest month-on-month increase of 11%. Exports to China lifted 4% in September, and were up 16% year-on-year for the month. For the year-to-date, Australian beef exports to China are down 30%. Japan remained the largest export market in September, lifting 5% for September, but is down 11% so far for the year.

Exports to the US climbed in September, just shy of year-ago volumes, and pretty much on par with July levels, which was the highest monthly total for the year-to-date. While this volume was still more than 25% lower than 2019, the US export price (90CL) averaged 12% higher in September 2021 compared to 2019, making up some of the gap.

Brazil is growing as a competitor for Australia’s US market share, sending their largest shipment of fresh beef to the market in September, since new access to the US market was enabled. Steiner Consulting Groups latest weekly update reports grinding beef from Australia and New Zealand are still in high demand and limited supply, with the Brazilian product more readily available and trading at a discounted price. For January to August Brazilian share of US beef imports was only just over 2% below Australia’s. Before trade stalled to China due to detected cases of BSE (mad cow disease) in Brazil, they also sent a record volume of beef to that market in August.

Strong export prices and export volumes remaining above falls in production signals strength in the sector and is assisting in keeping domestic returns historically high. However, competitor Brazil was definitely gaining market share before recent stalls in trade, with its export volumes to China lifting 25% year-on-year for January to June. Their price competitiveness and supply availability will see them to further compete in some of Australia’s key export markets – if they can regain and maintain access. 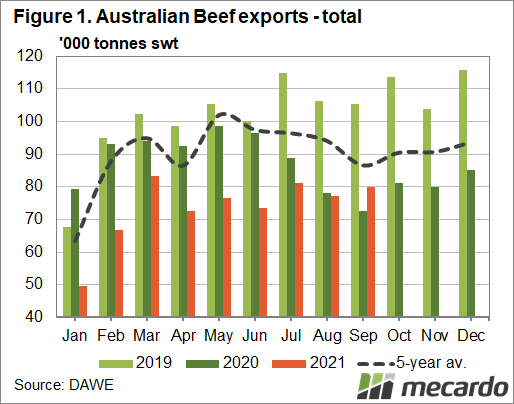