Broad crossbred prices are reported to have picked up since early September in New Zealand so it seems like a good time to revisit prices for the broad edge of Australian wool production.

Mecardo looked at broad crossbred prices recently (view article here). This article updates the graphs shown then. Unfortunately the published New Zealand quotes for broad crossbred wool have returned to the dark ages, with micron quotes replaced with general indications of price movement. New Zealand wool reports, such as they are now, are published by PGG Wrightson (NZ wool sales & results). This reduction in market transparency for broad crossbred wool producers comes at a time of reports of heavy Chinese buying and rising prices.

The first graphic in Figure 1 compares 33 micron price series from mid-2017 to last week, with the New Zealand series stopping in early September. The Australian series reached a low in late September, but jumped by 40% since then (from a depressed base level).

The second graphic compares an Australian 35 micron fleece price series and a 36 micron New Zealand full wool series which ends in early September, both in Australian dollar terms. Again, the Australian series bounces off late September lows but only by a modest 27%.

Finally in Figure 4 the 34 micron price ratio to a polyester staple fibre price series is shown from 1995 to October 2020. The ratio in September fell to around 1.25 which has been rock bottom during the past 25 years. 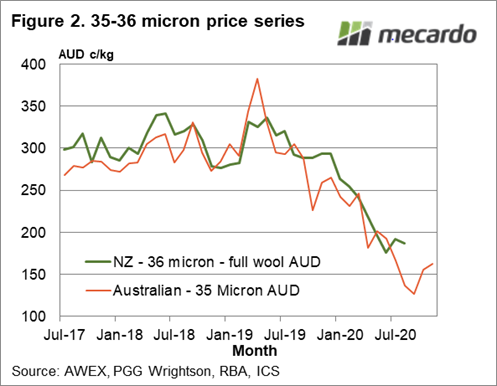 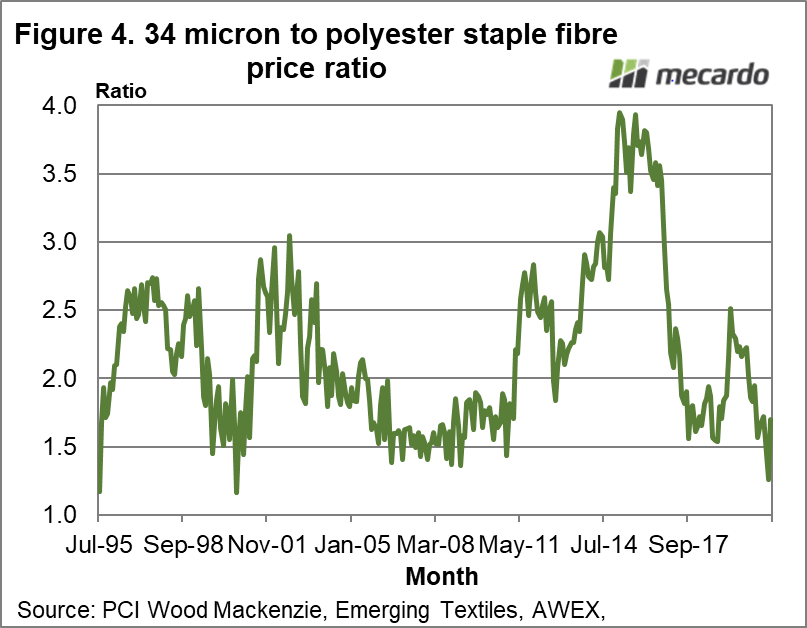