In recent years the proportion of short length (prems) broad merino wool has increased. This article takes a look at the supply and discounts of 21 micron short length wool.

Discounts for shorter length wool tend to widen during periods of high prices (strong rising price cycles) such as in 2002, 2011 and 2017-2018. Figure 1 shows the discount (in both percentage terms – line – and in cents per kg clean terms – bars) for 50 mm length 21 micron fleece compared to 90 mm length 21 micron fleece with a staple strength around 35 N/ktx. Out of interest the analysis must now exclude RWS wool as it seriously disrupts (widens) the discounts for 2021. The three main (inverse) peaks in the cents per kg discount align with the three rising price cycles mentioned above. Note that in percentage terms the peaks are similar while they increase in absolute size from 2002 to 2017-2018. Since 2018 the discount has shrunk back to levels within 50 cents of the long term median which is 150 cents.

In Figure 3 information from the first two schematics has been combined to show the proportion of prem length 21 micron wool sold by quarter from 2000 onwards along with the discount applicable to 50 mm fleece in cents per kg terms. Following the first two major increases in the discount (2002 and 2011) there is no real change in the proportion of prem wool. Following the third and largest peak in the discount there is a decrease in the proportion of 21 micron prem wool. The temptation is to assume causation between the two (extended large discounts leading to some of the prem shearing switching back to full length). At best we can view this as a working theory that needs to be tested by subsequent data.

The rising trend in the proportion of short length broad merino fleece seen from 2016 through 2019 has fallen slightly and now seems to have stabilised. Price discounts for the shorter wool are back to relatively minor levels after spending 2017-2019 at very wide levels, even with 10-15% of the 21 micron offering in the shorter length range. The experience of the past two decades shows that discounts for short staple length in the 21 micron category remains at modest levels except for when a strong rising price cycle turns up, when the discounts widen markedly. 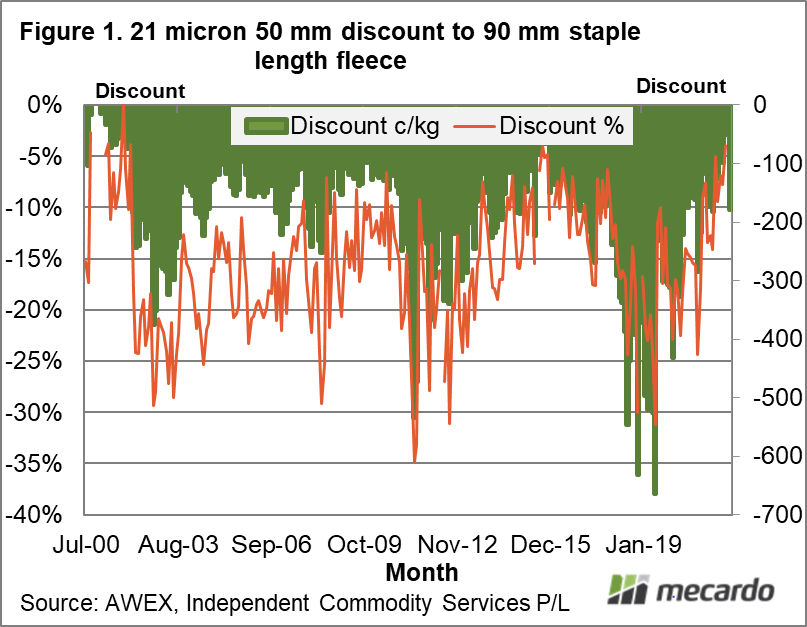 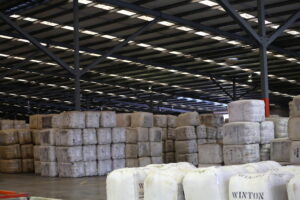