Broad Merino volumes on the rise

The flip side to falling fine Merino volumes as a consequence of improved seasonal conditions is the increase in broad Merino micron production. This article takes a look at this trend.

Supply trends in livestock based commodities tend to be slower moving than for the cropping industries. Wool in particular has slow moving trends as wool growth is a function of sheep numbers and seasonal conditions of the past year. Such slow-moving information can be easily overlooked in the stream of information which pours out of the media, especially as often the supply information is not of immediate importance.

The broadening trend in the Merino clip (running around 0.4 micron broader than a year ago) is evident in Figure 1. Sub-18 micron volumes continue to fall year on year, with little change around 19 micron. The broader micron categories are rising year on year with 21-23 micron volumes up 50% in September and about 20% for the three months to September. In terms of price pressure, the different production trends seen in fine and broad Merinos will continue to push the price differences between them wider.

Figure 2 shows the year on year change in AWTA 21 micron volumes (smoothed by three months) from mid-2016 to September 2020 (bars) along with the actual monthly volumes in farm bales (line). Starting in late 2017/early 2018 the production of 21 micron wool began to fall year on year. Production continued to fall through to late 2019, a full two years of lower production. You can see the monthly volumes fell from a range between 10 and 30 thousand bales to a range of 5 to 15 thousand. By late 2019 the year on year change in supply had steadied, even with big sections of eastern Australia still in drought. It is only now that supply looks to be starting to build some upward momentum. With a spring “in the bag” this momentum will persist through to the June quarter of 2021, at this stage.

In 2018 and 2019, the strength of a strong rising price cycle was supercharged for broad Merinos by falling production which persisted for two years. Forward into the coming year, production will switch from being a tailwind to a headwind for the broad merinos, putting downward pressure on their price relative to medium merino and crossbred prices. This will not change the overall price cycle or tends in the general wool market but simply weaken broad Merino prices in relation to other micron categories. 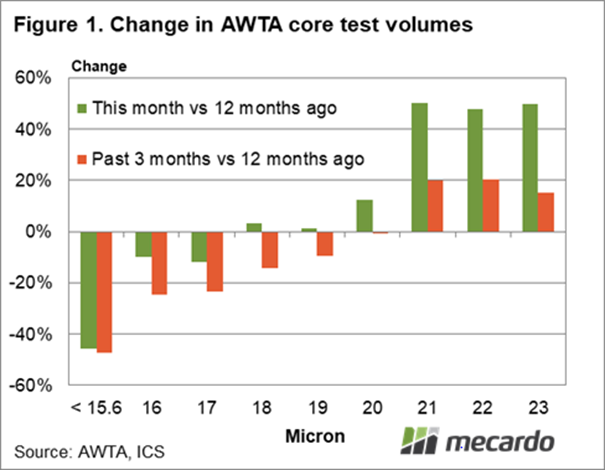 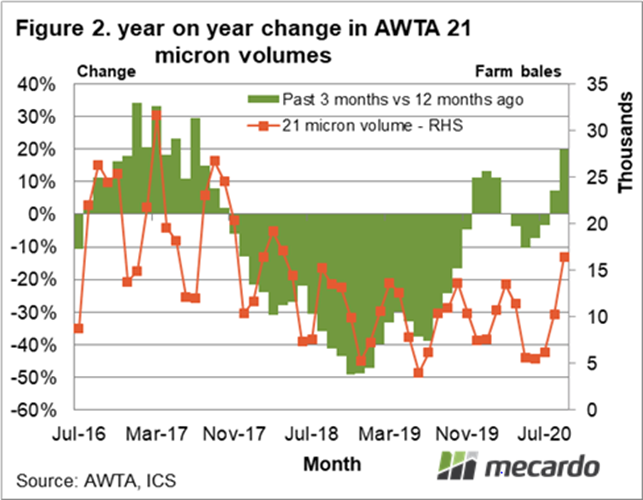