Bulls are on the loose again

The USDA’s stocks and acreage report threw an almighty curve ball on Thursday morning. The market appeared to be completely blindsided by the fact that the US farmer didn’t follow the money, instead opting for the common sense approach of maintaining a good rotation.

Despite the fact that corn and bean acres did not meet most trade expectations (read yesterdays report here), the area sown to wheat actually exceeded most of the trades guesses.  The biggest jump came in for the winter wheats (up ~3 million acres from last year).  Spring wheat is slightly down on expectations, possibly due to poor seeding conditions.  It is these northern US Plains, where Spring Wheat is grown, that is currently under considerable stress, whereas the winter wheat in the southern states looks likely to achieve record or near-record yields.

They say a rising tide lifts all boats, and so it was with wheat jumping in unison with the row crops.  With wheat now being a cheaper feed source than corn (CnF), the market is going to have to do some swift calculations on how much wheat can be fed and what this means for ending stocks.  As it is, corn and beans will likely have to ration demand, so this is going to keep a fire under the commodity markets for a while yet.

In isolation, there is not a wheat story to be made (yet).  The Russian farmer is about to harvest another big crop (~85mmt) as is Ukraine (~29mmt).  The Russian farmer remains a little reluctant to sell due to uncertainty around the export tax, but will eventually come to the market with big volumes.  While it is early days, Australia too looks in a promising position to come to the market with another above-average crop (watch this space).

The focus will turn to weather and production as we head into the critical next few months.  Flowering and pollination in the row crops, the Brazilian corn crop and the state of the Canadian crop will be vital for the direction of the markets going forward.

Canada is enduring some extraordinary heat at the moment, with temperatures regularly breaking all time heat records.  Crops will be stressed and will be pulling heavily from deep within the soil profile. The forecast is not promising any great rain either.

Future demand will also be crucial in price direction.  China is featured heavily in most assumptions around demand for corn and beans in particular.  There is a view that Chinese demand will remain very strong for the coming 12 months.  The assumption being that the Chinese economy will recover quickly from the on-going pandemic and also, the assumption that the pig herd rebuild is progressing as well as the Chinese state media would have you believe.

Wheat will continue to follow along with the corn and bean markets.  I suspect that wheat cash basis will take a hit in Australia due to current good growing conditions, but mostly about the absence of a wheat shortfall and the impending Northern Hemisphere harvest. 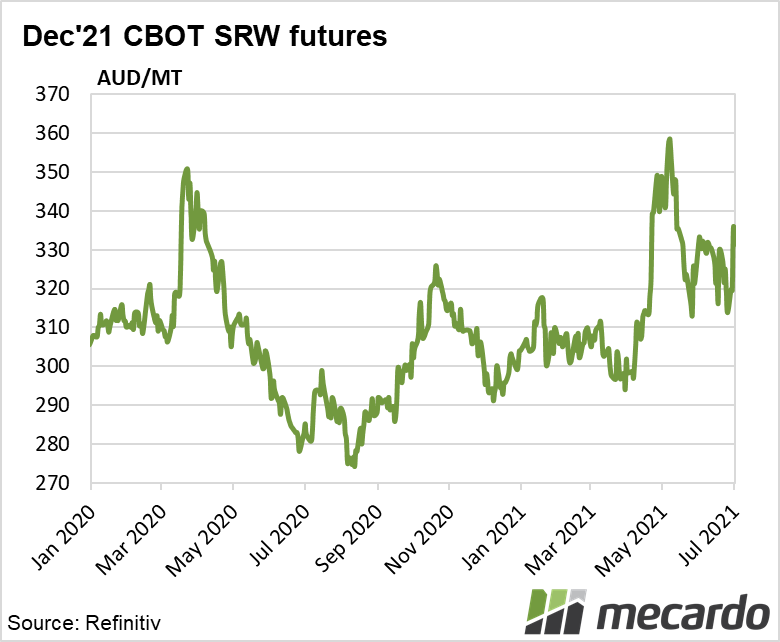