Canola prices have skyrocketed in the past month, both in Canada, and Europe. These elevated prices have also flowed through to domestic bids in the domestic Australian marketplace.

The climb in price has been relatively orderly over the last 24 days, gaining on average just under 1% a day. To put these prices into perspective, they currently reside outside of the 100th percentile, meaning record highs have been reached.

The cause of the price rally has been driven by an acute shortage of canola in Canada, with stocks bottoming out at levels not seen so low for 12 years. Reports of Canada buying Ukrainian Canola seed to support their continuing crushing mill operations in response to tight domestic supply have also fed the price rise, despite the volume only being quite low, at 60kt.

In addition, there has been the influence of the price inflation of another important component of the oilseed complex; soybeans. Soybean prices have been impacted significantly by reports of adverse weather conditions, rising 6% in AUD terms, while soy oil prices have spiked 21%. The implied gross crush spreads achievable to millers, as dictated by the relative prices of soy beans, oil and meal have also increased by 13-20% to $96-$146 AUD/ton, meaning the profitability of processing soybeans has also spiked, supporting demand.

The rise in international canola prices has been well reflected in Australian domestic canola bids over the same period.  In the case of Port Lincoln, there was a rise of 20%, to $722, followed by Port Kembla at 16%; settling at $689. On the West coast, Kwinana and Albany rose at a more sluggish 7%, albeit off an originally higher base of $618 to reach $664. Adelaide bid prices however, remained stagnant at $597.

Canola prices both internationally, and domestically in Australia have risen to record highs off the back of tightening supply. With prices having never been so good for Australian canola, any producers out there still holding long positions or stocks of canola are in an enviable position to take advantage of the solid prices available. 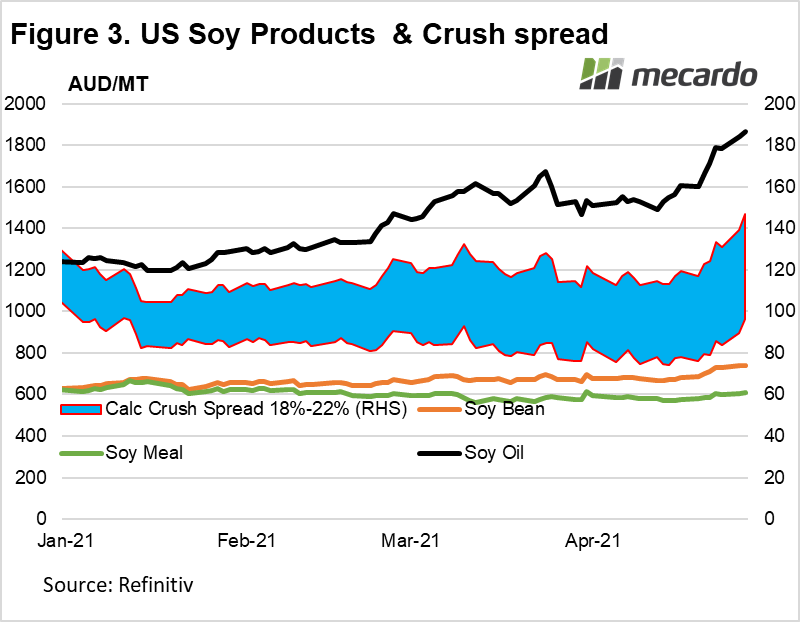