Palm oil prices have continued falling this week on the news that Indonesia will cut export taxes, reaching the lowest point since April, dragging canola prices down with it.

Indonesia, which typically accounts for over 60% of global palm oil exports recently instigated a three week ban on palm oil exports which was reversed on the 23rd of May 2022. The measure was designed to increase domestic cooking oil stocks and cool prices for the local populace in time for Eid-al Fitr, the celebration which marks the end of Ramadan, and quell rising protests.

The restrictions resulted in weak prices for fresh fruit bunches for palm farmers across the nation, who successfully lobbied for an end to the ban, as refiners limited their intake of feedstock as oil storage capacity rapidly filled during the restriction period.

Despite the lifting of restrictions, the subsequent resumption of flow of palm exports out of Indonesia were stifled due to a quagmire of government red tape and confusion over export license application procedures.

In order to jump-start the stalled palm oil export industry, the Indonesian government introduced an initiative which enabled preferential access to lower export levies for up to 2.25mmt of oil for companies that make firm commitments to participate in a government run program for the distribution of cooking oil in the domestic marketplace.

On Tuesday 14/06/22, Indonesia confirmed the substance of it’s prior announcements, revealing that the maximum export levy would be reduced by 46% to $200/mt from $375/mt, on a temporary basis till July 31. For those companies that elect not to join the domestic distribution program, a pathway to clear the high backlog of inventories they have accumulated over the earlier ban period was provided, at the penalty of an additional $200/mt export levy.

The effect of this change to Indonesia’s regulations was sharp, with crude palm oil (CPO) futures contracts delivering in the next four months on the Malaysian exchange falling between 4 and 6% in the last week, (figure 1), exacerbated by recent dips in soy oil and crude mineral oil markets.

The impact was felt in other parts of the oilseed complex also, with the MATIF forward curve falling in excess of 3% over the same period. (figure 2)

Closer to home though, indicative Australian canola markets bucked the trend, with Geelong prices lifting $4 to $959.5/mt since last Friday, albeit looking more broadly, there has been  a $49(5%)/mt fall since the lift of the CPO export ban in late May.

A return of Indonesian palm oil exports flowing into the international market has increased vegetable oil supply dampening prices across the oilseed complex, including canola, as a result. The sharp change in export levies is only a very temporary measure, but the move signals solid intentions by the Indonesian government to support CPO exports into the future, indicating that another repeat of the export ban debacle is unlikely. 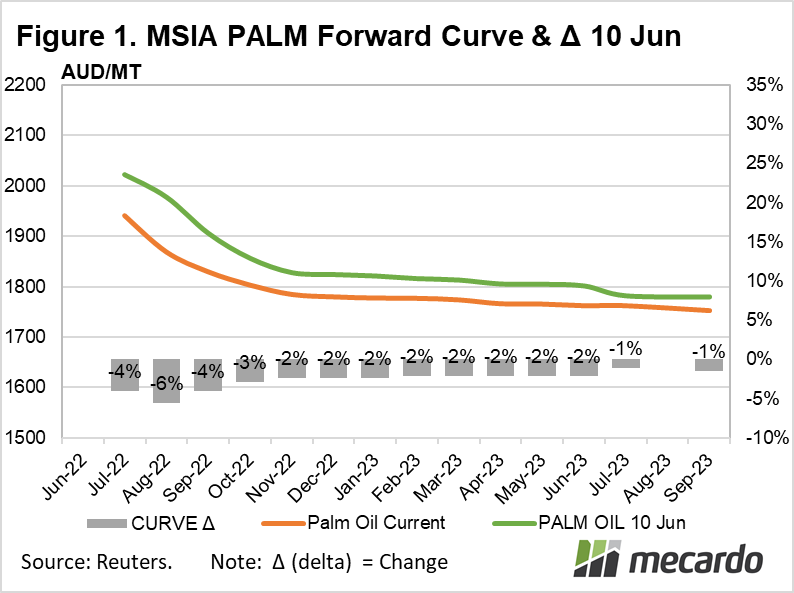 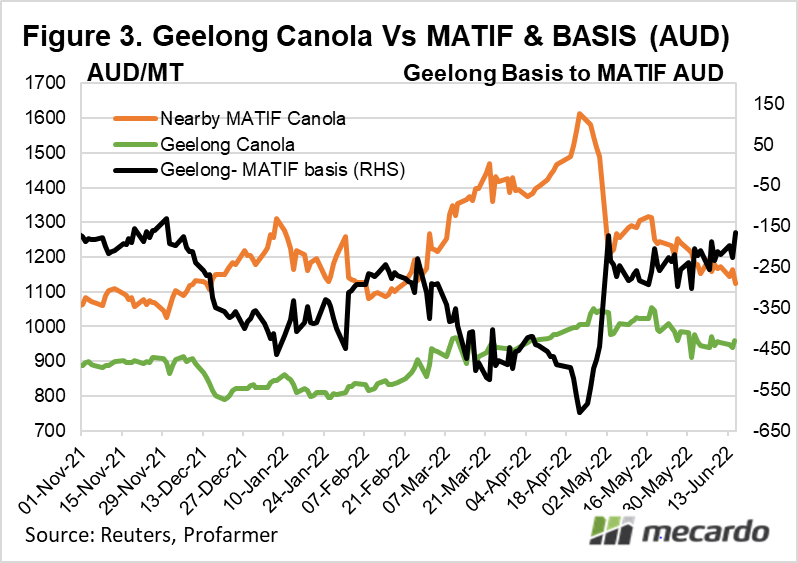