Cashmere is luxury fine micron apparel fibre, often claimed for apparel sold in souks and markets around the world when the price level being negotiated tells the buyer that there is no cashmere in the piece. Production is basically limited to an area bordered by China, Mongolia and Iran, so fine merino is often blended to both add volume and help with fabric quality. As such there is a link between these fibres which this article takes a look at.

Fine merino prices do not operate in a vacuum, with interactions between fibres contributing to price levels and other fibre prices helping to reflect the general levels of demand operating for luxury apparel. As such cashmere prices help to provide context for fine merino prices.

Figure 1 compares monthly prices for 16 micron (an average combing fleece price series) shown with bars and a cashmere prices series (Chinese white hosiery 38 mm in length) which uses the right hand axis. A feature that stands out is the variable correlation between the two price series. During the 1995-2001 period, the two series are highly positively correlated. After 2003 the correlation falls away.

So where is the market now? Cashmere prices have lifted in recent months, so the price ratio is running around 0.155 which is close to the middle of the range. In terms of cashmere, 16 micron prices are neither cheap nor expensive. There is scope for the 16 micron price to lift by 20% before it starts to reach its upper limit in relation to current cashmere price levels.

Figure 3 repeats the analysis of Figure 2, using a 15 micron combing fleece price series in place of the 16 micron series. Prior to 2003 the 15 micron price traded at much higher levels, with the price ratio to cashmere at what looks like stratospheric levels now. Keep in mind 15 micron in the year 2000 was some 6 micron finer than the average merino micron, equivalent now to 13 micron. Since 2008 the 15 micron price ratio to cashmere has operated at a slightly higher level than the 16 micron ratio. It is currently running at 0.172 of the cashmere price so there is scope for the ratio to rise. 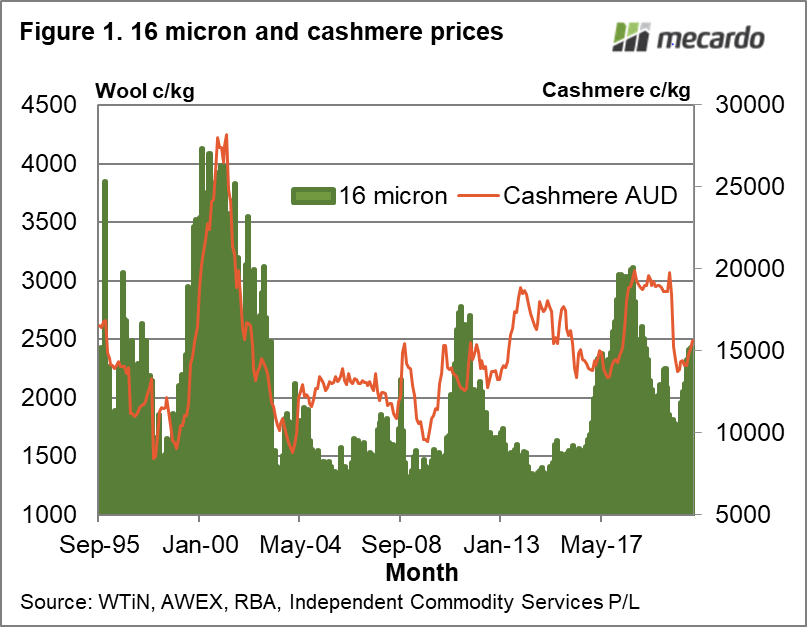 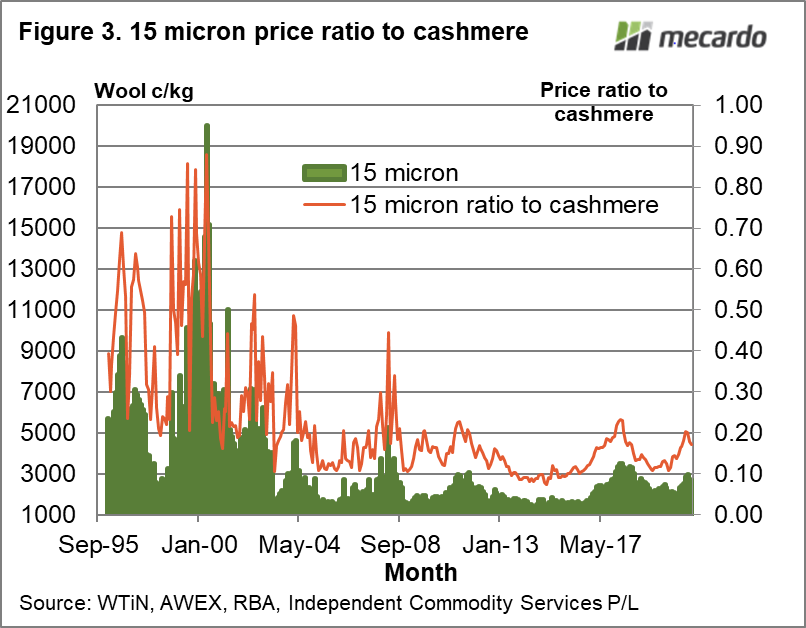