The Eastern Young Cattle Indicator (EYCI) delivered yet another week of stagnation, where it failed to break above the 900¢/kg cwt barrier. Slaughter continued its healthy uptrend, though this is not unusual for this time of the year.

Yardings followed on to build on their recovery on the week prior, adding another 6%. Offerings strengthened in NSW and VIC, which both increased 20% week on week, while QLD posted a mild decline of 4%. A total of 44,934 head were yarded on the east coast for the week ending 21st May 2021, up 2,662 head from the week prior.

Slaughter also posted gains for the third week in a row, putting on a solid increment of 5% from the week prior, bringing the total increase to 17% over the last three weeks since the end of April.

The EYCI continued to hover about in the 880-900¢/kg cwt range, showing no real trend toward breaking easily out higher, and finished the week off only 4¢ (<1%) higher than last week, at 891¢/kg cwt. Roma, Wagga, and Dalby retain the position of key contributors to the EYCI, at over 50% of total volume. The processor share of the EYCI stood at 10.5%, while predominantly high cost per kilo vealers represented 15.5% of volumes.

An average price of 967¢/kg cwt across 261 head was recorded at Scone, due to that market being dominated by vealers fetching in excess of 1,000¢/kg cwt while Camperdown took the wooden spoon at 692¢/kg cwt.  On the West coast, the Western Young Cattle Indicator (EYCI) surged 59¢ to close at 1024¢/kg cwt for the week. Vealer cattle continue to be well represented in the Index, at over 80% of total volume, but yearling steers fetched excellent prices, averaging 1090¢/kg cwt across the 46 that traded.

The national category indicators were mostly in positive territory this week, with medium steers the star performer, putting on 16¢(4%) to reach 397¢/kg lwt. However, processor steers and medium cows bucked the trend, slipping marginally by 3¢(<1%) and 2¢(<1%) respectively to close at 460¢/kg lwt and 286¢/kg lwt.

The Aussie dollar ticked up a smidgen on the prior week to finish the week to 0.774USD. Risk sentiment has improved as a result of inflation concerns beginning to calm down, but the Aussie has not been impacted by this as yet. The Chinese Renminbi, or Yuan showing strength recently, combined with elevated commodity prices, may be supportive to the AUD for the future.

This week, the main driver was increased demand stemming from the approach of the US Memorial Day holiday, combined with accelerating foodservice industry activity, and a general shortage of lean beef due to low imports, particularly from Australia.

With slaughter on an upward trend, indicating increasing demand for beef, and with the EYCI still holding its ground successfully, all indications are we might see another week of sideways movement in the market coming up.

On the weather front, the next 8 days are looking relatively dry in the east with <5mm tipped to fall right across the country. Despite the lack of moisture, the less damp and cold conditions may be favourable for keeping pastures growing that little bit extra in the short term, providing little incentive for producers to rush to market just yet. 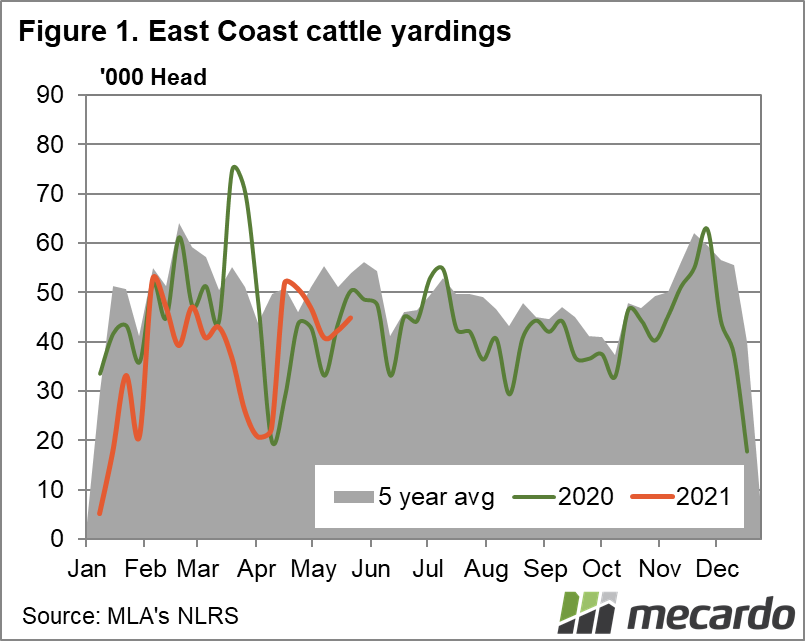