This week is looking more positive with the EYCI still holding its ground, and some promising gains finally being made on processor cattle, with restockers continuing their crawl upward. Supply has stabilized, with yarding numbers on an even keel thanks to big lifts in NSW numbers to counterbalance Victorian reductions.

East coast yardings, week on week were relatively steady on the balance, only dipping slightly overall. Uncertainty in Victoria saw yardings continue to plunge, but NSW rushed to fill the gap.  A huge 33% fall in VIC, and 40% fall in the more minor SA market was almost offset perfectly by a 33% spike in NSW figures. Overall a 1.1% decrease in numbers saw 42,032 cattle yarded on the east coast for the week ending 24th July, 33% down compared to the same time last year.

In Victoria, falling yarding numbers and lower slaughter are linked to the COVID-19 related closure of abattoirs, however, midfield meats in Warrnambool reopened after only three days, and JBS announced a gradual reopening of their Brooklyn plant earlier this week.

The Eastern Young Cattle Indicator (EYCI) remained relatively steady, only creeping up 0.2% on the prior week, settling at 754¢/kg cwt.

Almost all categories showed strength and put on encouraging gains this week, buoyed by continued tight supply from low yarding numbers, and restocker activity, with the exception being vealer steers, which continued their downward slide.

Lighter animals also got a slice of the action, with restocker yearling steers putting on 4¢ to close at 434¢/kg lwt, while feeders edged up 2¢ to 394¢/kg lwt.

Vealers continued falling, adding onto losses accumulated in prior weeks to dip 4¢ (-1%) down to 386¢/kg lwt. Vealer prices have dipped overall by 29¢, or 6.95% since the start of July, but are still 25% above levels seen last year.

On the export front, the 90CL Frozen Cow price continued holding its ground, even against our rising dollar, creeping upward by 2¢ to settle at 686¢/Kg. The aussie dollar, has built on the gains it made last week, putting on another 1¢, reaching skyward to 0.719 US, putting further pressure on Australia’s international competitiveness.

With the reopening of abattoirs in Victoria such as JBS, we can expect an increase in slaughter numbers and a perception of a more competitive landscape at saleyards. Coupled with little rainfall predicted for the next week over the east coast, we may see these factors lead to some increase in yardings as sellers return. 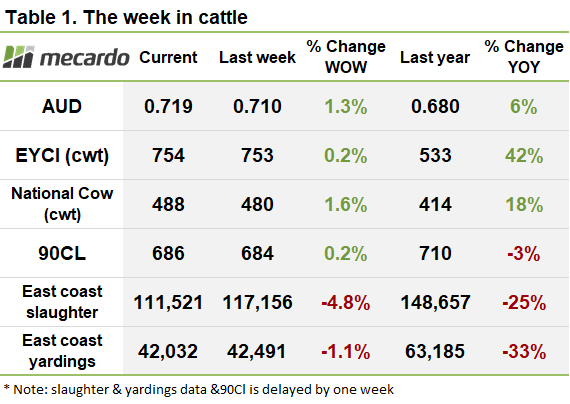