Cattle on feed find support at the 1 million head mark

With the strong season keeping more females at home and allowing steers to be finished on grass the number of cattle on feed has fallen heavily year on year.  However, it was interesting to see that coming into spring lotfeeders still managed to find plenty of cattle to put on feed.

Figure 1 shows cattle on feed numbers basically going sideways in the September quarter, with numbers holding at 1.01 million head.  A 3% fall in Queensland, and 18% fall in Victoria were largely offset by a 12% increase in NSW.

Compared to last year there were 10% fewer cattle on feed, with all states except WA recording a decline.  WA was interesting, with 38%, or 10,518, more cattle in feedlots at the end of September. Traditionally September is the low in WA as spring growth keeps cattle out of feedlots, but a drier season and cheap barley seems to have encouraged feeding.

Figure 1 also shows national marketings and estimated placements.  The placement number is simply the difference in cattle on feed compared to last quarter, with marketings added.  This tells us how many cattle have entered feedlots.

Grainfed cattle marketings fell to almost a four-year low thanks to falling numbers of cattle on feed in March and June. This no doubt added to strength in grassfed cattle markets, with processors competing to replace the cattle which had previously been easily sourced from feedlots.

In NSW, grainfed cattle marketings were at their lowest level since 2013 (figure 2).  This no doubt reflects the smaller herd and better season throughout NSW.  NSW feeders managed to source more cattle in the September quarter, with placements lifting 31%.

Feedlot capacity continued to grow strongly in September, despite the lower numbers.  ALFA and MLA report feedlot capacity now sitting at a new record of 1.449 million head, up 1% on the June quarter and 5% on September 2019. All the additional capacity for the quarter came from Queensland. Rising capacity and steady cattle on feed numbers obviously results in lower utilisation, to a new four year low.

Cattle on feed numbers are just managing to stay north of the 1 million head mark, and with 30% of space not being used, it’s not surprising feeder prices are at record levels.  There is not much reason for the current market dynamic to change, especially in southern states.

Processors need consistent supply, and feedlots are the best way to guarantee this.  As such they need to be kept at a certain level, and it looks like 1 million head might be about where it needs to be at the moment. 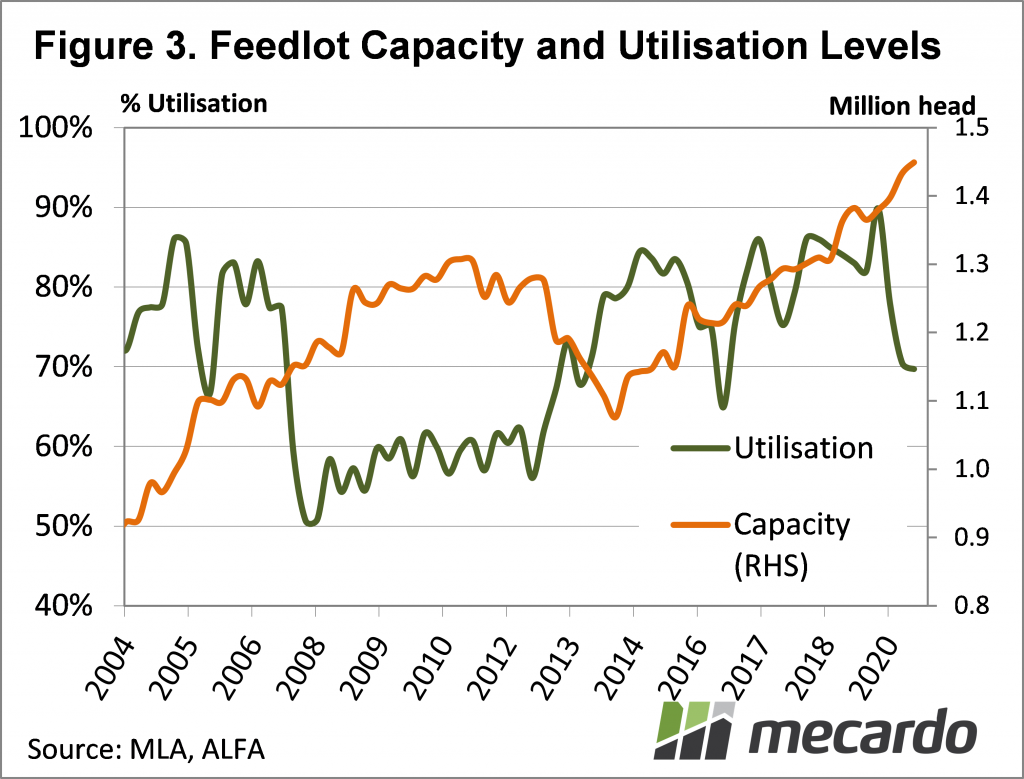