Every year Agriculture Victoria conduct benchmarking across a number of livestock producers across the state. With over 50 years of data for Western Victoria and 12 for Northern Victoria and Gippsland it’s an interesting study in the profitability of livestock farms. The report for the 2020-21 financial year has recently been released.

It will come as no surprise for readers to find out that 2020-21 was a good year for cattle producers. In Northern Victoria it was the best year in 12 years of data, while in Gippsland it was the second best over 12 years.

As a measure of the year we are using Gross Margin per hectare in real terms, which came in at $869 in Western Victoria, $525 in Northern Victoria and $691 in Gippsland. Figure 1 shows that after the dip in 2019-20, caused by lower prices and a poor season, cattle gross margins bounced back strongly.

The amount of rainfall received seemed to correlate strongly with gross margins across the regions. Western Victoria had a good season, while Northern Victoria is normally drier, and hence had lower gross margins per hectare. Gippsland’s season can vary widely across the survey area, but in general it was ok and this was reflected in strong gross margins.

Costs aren’t broken down by enterprise in the report, but overall enterprises average variable and fixed costs were relatively steady. Lower costs are part of the reason why the Western Victoria gross margin was so strong in 2017-18.

Figure 2 shows how average real sale price has equated to real gross margin over the 50 years of Western Victorian data. In 2020-21 the price vs gross margin was well above the trend line, as have been the past couple of years. This is explained by higher ¢/kg prices encouraging growers to spend more to produce more beef, which makes sense in terms of maximizing returns.

Cattle businesses were very profitable last financial year, and are set to have an even better year in 2021-22. We all know cattle prices have been on the rise since early 2020, and this should result in even stronger profitability for Victorian cattle producers this financial year. 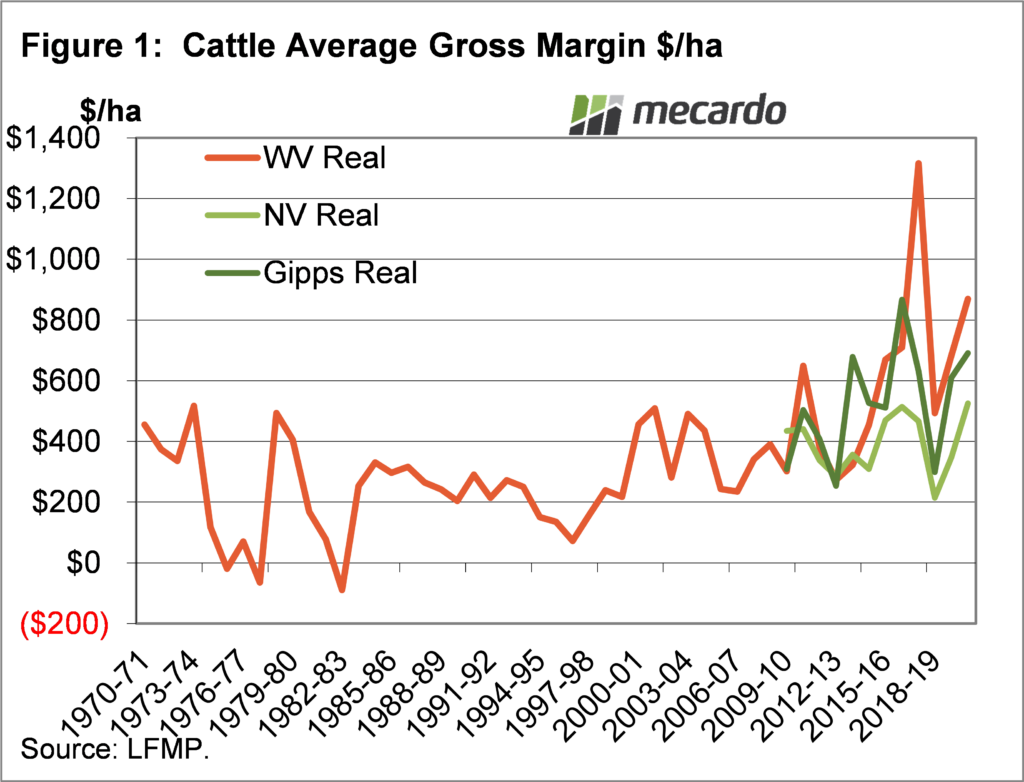