The official cattle slaughter numbers for May were released last week, and as expected, they were well down on last year, but it doesn’t look to be enough. Total cattle slaughter was actually up on April, gaining 2% due to more working days.

Total cattle slaughter for May was down 18% on 2019, but last year May was the highest slaughter month of the year. Meat & Livestock Australia (MLA) weekly slaughter data for June and July suggests there have been 19% fewer cattle slaughtered compared to last year. This is quite a decline, but it’s still not enough to hit MLA’s slaughter target of 6.9 million head.

For cattle slaughter to be 6.9 million head this year, the rest of 2020 will have to be 30% lower than last year, with figure 1 showing how it will pan out with normal seasonality.  This would have to be the lowest spring slaughter rates since 1989.

It is the Female Slaughter Rate (FSR) we track to get a handle on whether the herd is growing.  To May at least, it seems the herd rebuild was still to start. Figure 2 shows the FSR, which is the proportion of slaughter which is female, hit its highest level since October last year at 55.5%.  The FSR usually peaks in May and June, but it has a long way to fall to get back to the rebuild level of 48%.

Continued high rates of female slaughter could be due to high prices and the uncertainty surrounding the market going forward.

Amid the uncertainty afflicting the demand side of the market, there is plenty of certainty surrounding the supply side. Its likely cattle slaughter will continue to track at 20% or more lower than 2019 for the rest of the year, and into 2021.

Female slaughter will also have to decline, but it has some way to go if we are going to have a bigger herd in June 2021 than we finished with in June 2020. 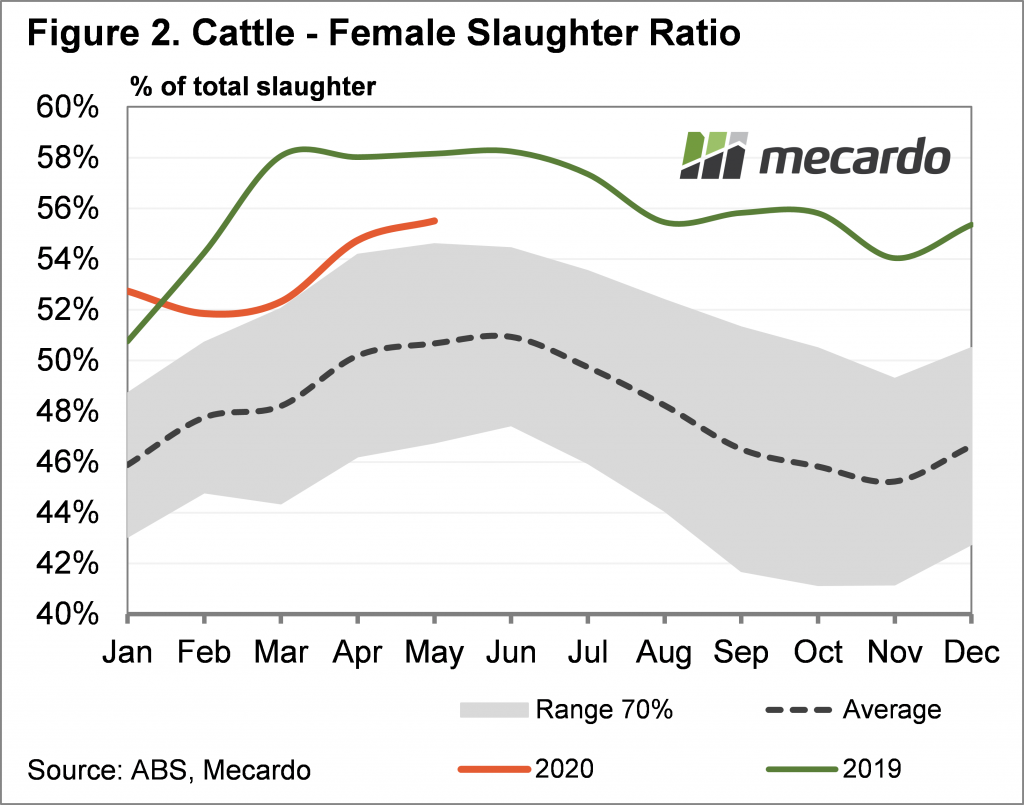