Caution in the market

There were some mixed results in the cattle markets this week but overall the sentiment was one of caution amongst buyers, who are, as commented by AuctionsPlus last week, becoming (if they weren’t already), “increasingly aware of expenses and rising costs.” While the seasonal conditions are still good for most cattle producing areas, it seems more a case of outside economic factors putting the brakes on the cattle market recently.

Given the increasing pressure on Australian businesses following the reserve banks 3rd rate rise in recent months, it’s not surprising we are seeing a little bit of hesitancy in the market. Despite historically good prices, for most cattle lines, increasing costs of production appear to be weighing on the market.  The barometer for the Australian cattle market, the Eastern Young Cattle Indicators’ (EYCI) recent downward trend is somewhat reflective of this.

Slaughter statistics remain steady, with 96,365 head of cattle processed on the east coast for week ending 1st July, 2022, just a 1% drop on the week prior. (table 1)

In terms of supply to the yards on the east coast, a lift from QLD wasn’t enough to offset a fall in NSW. Yardings numbers for the east coast last week, 1st July, were 5% lower than the week prior at 43,854 head.

Looking at the current weeks supply, eligible yardings numbers for the EYCI have dropped considerably, with just 7,504 the rolling 7-day average. Key saleyard contributors towards the EYCI this week were Roma Store in QLD & Wagga in NSW with both providing around 12,000 head of cattle at just over 1000¢ on average each, while all other saleyards contributed no more than 1,000 cattle. The EYCI continued on its downward trajectory, down 9¢, to 1005¢/kg cwt, but is still well above the 5 year average. (figure 1)

Over in the west, the Western Young Cattle Indicator (WYCI) went the other way to its’ eastern counterpart, moving up 34¢ on last week to 1110¢/kg cwt.Just 491 head contributed to the 7 day rolling average there and the Mount Barker saleyard again contributing the most to the WYCI at 72%. (figure 1)

Looking overseas and the US frozen cow 90CL fell in US terms, losing 2 cents to 270.5¢US/lb, while it crept up marginally (0.2%) in Aussie dollar terms, closing the week at 867¢/kg swt. The US Steiner hinted that imported beef prices for the US are being softened by increasing in supply from Brazil & New Zealand.

With headlines being dominated by the flooding in parts of NSW, the BOM’s new weather tool/project called “Forewarned is Forearmed” could come in handy for all agricultural producers in Australia.  A free webinar is scheduled for next week, to explain the new features & outlooks of the program with the aim of “equipping farmers and agricultural value chains to proactively manage the impacts of extreme climate events.” You can find the link to sign up for the webinar here on MLA’s website.

As many producers around the nation feel the pressure from increasing costs with no short-term relief in sight, we can expect the cattle market to remain subdued for the time being. 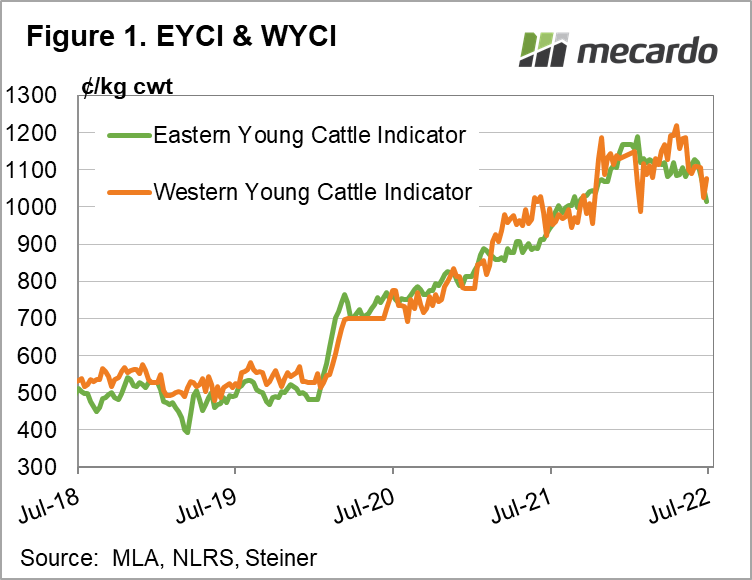 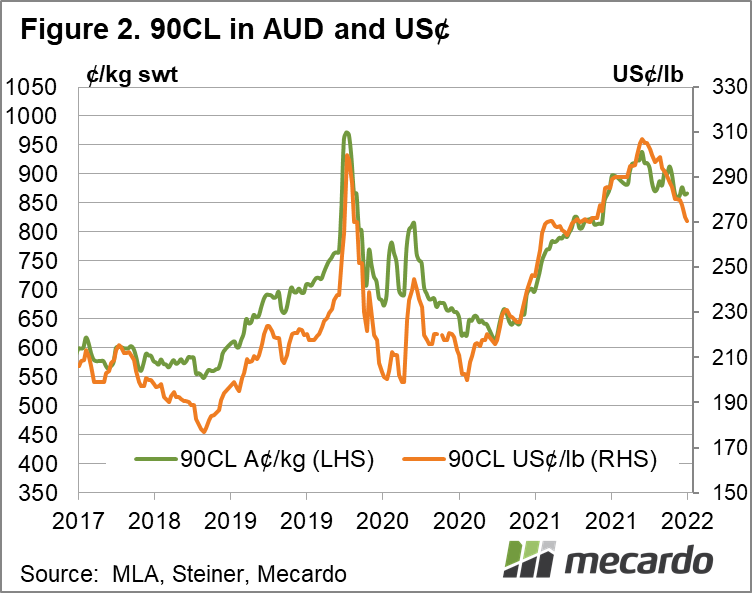