Caution in the market

The Australian wool market recorded falls across the board this week, in tandem with a large rise in the Aussie dollar. AWEX reported that the offering this week was ‘slightly better’ than last week, with strong buyer attention to types with AWEX Style 4 or better although this did not translate to higher prices than last week.

The Western Market Indicator (WMI) also fell in Aussie dollar terms, down 22ȼ to finish the week at 1424ȼ. All indicators fell in WA between 21 & 35 cents.

Over in the east and all indicators were weaker than last week. Microns 22 & finer recorded ranging from 22 to 46 cents.

Crossbred wools didn’t fall as much with prices down between 7 & 17 cents, except for the 26 MPG in Melbourne which fell 43ȼ. Cardings in Sydney fell 24ȼ, 9ȼ in Melbourne & 27ȼ in Fremantle.

The national offering has continued it’s recent downward trend to 45,149 bales this week. The national pass-in rate was significantly lower, with AWI reporting that there has been a trend of growers holding onto their wool for better prices.  16.9% of the offering was passed-in resulting in  37,501 bales sold, the lowest amount since the week before Christmas ’21.

This week on Mecardo Andrew Woods took another look at RWS accredited wool premiums cycles concluding that in cents per kg terms the broader micron categories are receiving higher premiums than the finer micron categories. Andrew followed up this article with a look at premiums being achieved for not only RWS accredited wool but also other quality systems such as SustainaWool & Authentico.

Next week all centres are selling on Tuesday & Wednesday with Melbourne having an extra sale on Thursday again with 48,123 bales on offer for next week. 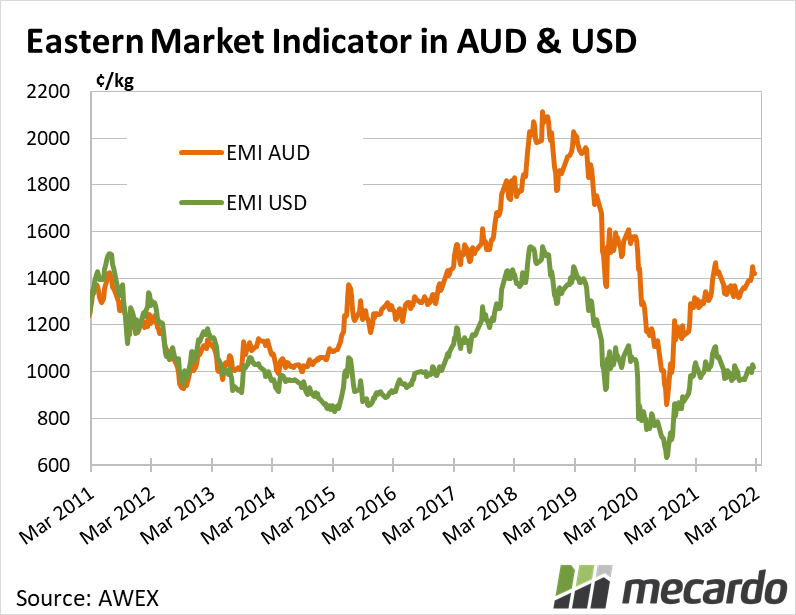